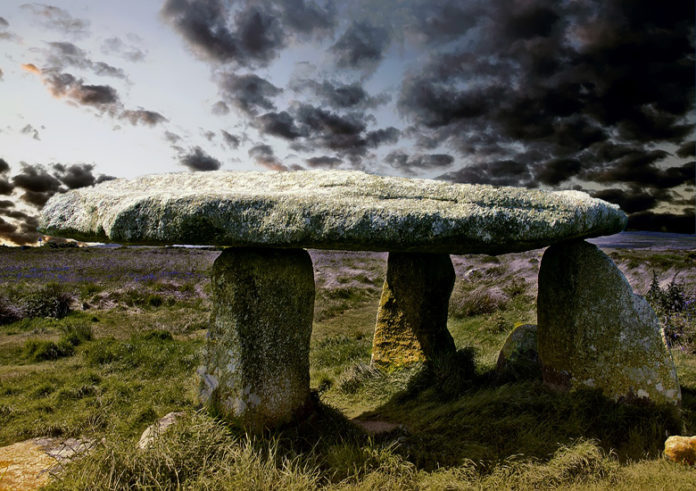 Lanyon Quoit is a dolmen in Cornwall, England, United Kingdom, 2 miles southeast of Morvah. It collapsed in a storm in 1815 and was re-erected 9 years later, and as a result the dolmen is now very different from its original appearance.

Description : Lanyon Quoit currently has three support stones which stand to a height of 1.5 meters. These bear a capstone which is 5.5 meters long, and which weighs more than 12 tonnes. In the 18th century the quoit had four supporting stones and the structure was tall enough for a person on horse back to ride under. On 19 October 1815, Lanyon Quoit fell down in a storm. Nine years later enough money was raised by local inhabitants to re-erect the structure, under the guidance of Captain Giddy of the Royal Navy. One of the original stones was considered too badly damaged to put back in place, thus there are only three uprights today and the structure does not stand as high as it once did. The reconstruction also placed the structure at right angles to its original position.

The quoit lies at the north end of a long barrow 26 meters long and 12 meters wide. The barrow, which is covered by grass and bracken, is damaged and its outline is difficult to see. At the south end of the barrow are some more large stones which may be the remains of one or more cists.

Investigations :  1769 etching by William Borlase of the Lanyon Quoit, before its collapse in 1815. In 1769 William Borlase described the megalithic site for the first time in a publication, illustrated with etchings in which the Lanyon Quoit’s design and floor plan has a different look from today. Lanyon Quoit collapsed in a storm in 1815 and was re-erected in 1824. An etching from 1857 by R. T. Pentreath shows the megaliths in their presently known arrangement. A similar drawing appears in the 1864 book A Week at the Land’s End by John Thomas Blight.

In 1872 William Copeland Borlase, a descendant of the earlier Borlase, conducted further investigations and excavations were carried out. He reproduced the etchings of his ancestor and found them much more valuable than any other contemporary sketch since the monument had been subjected to such considerable change. In 1952 the then owner Edward Bolitho from Tregwainton donated the plot of land with the monument to the National Trust.

Access : Coordinates: 50.1475, -5.599167 / Location : Lanyon Quoit is located northwest of Penzance on the road between Madron and Morvah. It stands 50 meters to the east of the road. 700 metres to the west lie the remains of another dolmen known as West Lanyon Quoit./ B3312 Madron To Morvah Road, Bosullow | 2 Miles Drive From Madron, Madron, Penzance TR20 8NY, England. 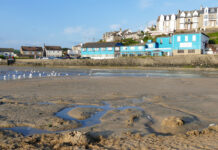 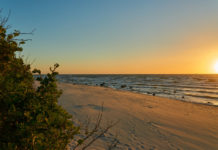 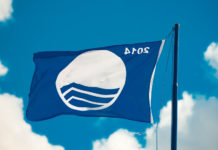 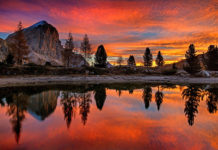 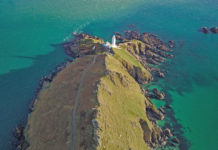 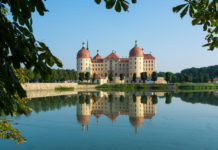