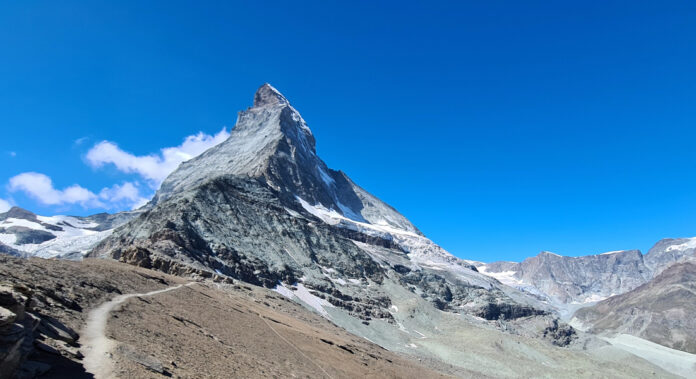 The Matterhorn is a mountain  in the Western Alps (Pennine Alps – Weisshorn and Matterhorn Alps – Bouquetins-Cervino chain), along the border between Italy and Switzerland ,west of the Monte Rosa massif, east of the Grand Combin and south-west of the Mischabel massif.

The Matterhorn, with a height of as much as 4478 meters, is the highest peak in Europe.
The path to this mountain is considered very dangerous due to steep ledges, cliffs, frequently changing climatic conditions, rock falls and avalanches. Therefore, most tourists prefer to simply admire the Matterhorn and take pictures.

The first successful ascent of the Matterhorn was made by the British in 1865, that is, almost 150 years ago. It ended in tragedy – four out of seven participants died due to a broken rope. Nevertheless, the number of tourists coming to the Matterhorn region has steadily increased since the middle of the 19th century, especially after a railway station opened here in 1933, connecting the Matterhorn region with the main Swiss cities.
Climbing the Matterhorn still exerts great fascination today, but is reserved only for experienced mountaineers. The two normal routes, even if facilitated by the laying of various fixed ropes, follow those of the first ascents; the one that starts from Zermatt runs along the north-east ridge “dell’Hörnli”; the one that starts from Cervinia develops along the south-west ridge “del Leone” (Arête du lion). Another fairly popular but more demanding route is the one along the “Zmutt” ridge.

Access : Coordinates: 45.976389, 7.658611 / The nearest international airports from Zermatt are located in Geneva and Zurich at a distance of 230-250 kilometers. You can buy a train ticket or rent a car for the trip.
/ The Matterhorn is accessible either by the Valtournenche, in Italy, or by the valley of Zermatt, in Switzerland.
/The usual pattern of ascent is to take the Schwarzsee cable car up from Zermatt, hike up to the Hörnli Hut elev. 3,260 m (10,700 ft). / By the The Glacier Express :  The “express” train connecting railway stations of the two major mountain resorts of Zermatt and St. Moritz via Andermatt in the central Swiss Alps.

Go next : Zermatt is one of the most famous mountain resorts in Switzerland. / Saas-Fee is the biggest town in the Saas valley in the Swiss canton of Valais. / Swiss Alps Jungfrau-Aletsch is a protected area and a UNESCO World Heritage Site / The Italian town of Breuil-Cervinia in the Aosta Valley / Courmayeur is a skiing and mountaineering resort at the head of Valle d’Aosta.