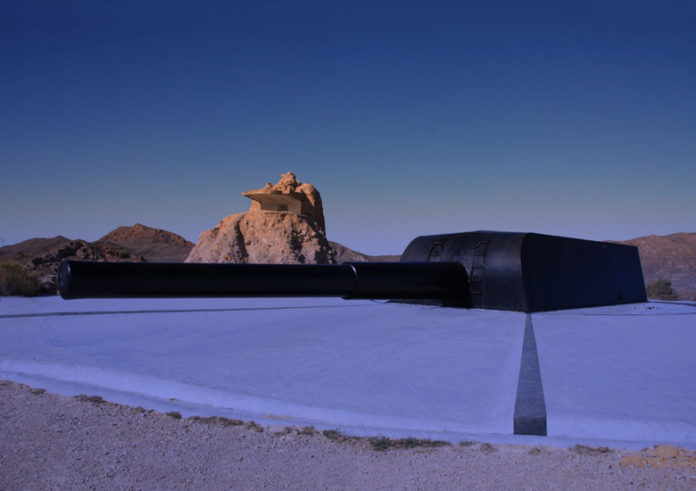 The Battery of Castillitos, also known as C-1, is a Spanish fortification of coastal artillery support located in the Sierra de la Muela, Cap Tinyos and Roldan, within the municipal district of Cartagena -Murcia Region- , and more specifically in the Perin provincial council. It has been declared an Asset of Cultural Interest by the Second Additional Provision of Law 16/1985, of June 25, of the Spanish Historical Heritage.

The battery was constructed and knuckled between 1933 and 1936 according to how it was projected in 1926 during the program of granting a defensive belt to the strategic square of Cartagena by the  Primo de Rivera. Castillitos was equipped with  guns on the coast of the British company Vickers-Armstrongs, model 38.1 / 45 cm (fifteen inches). These pieces had the power enough to shoot a projectile of almost a tonne at 35 kilometers.
Its work was to protect the entrance to the bay of Cartagena next to its twin, The Battery de las Cenizas, also known as C-9 located in the head Negrete, in a crossed fire that prevented the entrance of hostile elements.

During the Spanish Civil War goes He made a discharge against the fleet of the rebellious side in April 1937, although the presence of the fortifications that surrounded the city was enough to take over the rebel ships.
Castillitos is located at a height of 250 meters, and its facade was built imitating a medieval castle, following a historicist style with influences of eclecticism and modernism, currents in vogue at that time.  The battery architecture tends to hide itself by digging into the mountain or imitating the texture of the rock to prevent its vision from a distance. Once inside the complex, each piece of artillery has a room of machines, warehouses of powder and spare parts and a quarter of load.

Access : Coordinates : 37.5402, -1.120542 / Cabo Tinoso, 30868 Cartagena, Municipality of Cartagena, Spain
/ By car
Highways: the Region of Murcia has a network of highways that connect the city of Murcia with the north and south of the Peninsula. The main access road to the city is the Murcia A-30 motorway, which starts in Cartagena and connects with the A-7 motorway.
National roads: the N-340 highway, known as the Mediterranean Highway, connects Cadiz with Barcelona, passing through the center of the city of Murcia. Other routes of circulation are the N-344 (Almeria – Valencia) and the N-301a (Madrid – Albacete – Murcia – Cartagena).
/ The access to the car park where to leave the car to start the route on foot with the children is already worthwhile. It is a road of 8 km, with wide curves and gentle slope that was built to raise the tubes of the guns of 8 tons in weight and 17 meters in length. We can see different coves and enjoy wonderful landscapes. To get to this road, if we come from Cartagena in the direction of La Azohia, we have to deviate towards RM E23 towards Campillos de Adentro and Faro de Cabo Tinoso.