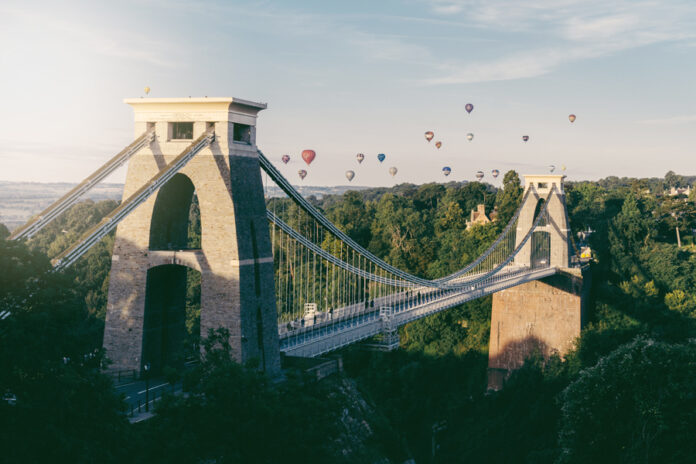 The Clifton Suspension Bridge is a chain bridge over the River Avon in southwest England, UK.
The first plans for the construction of the crossings appeared 80 years before the idea was implemented. It was erected in the period from 1836 to 1864. . The bridge is located near the city of Bristol.
The engineer who designed the bridge was Isambard Kingdom Brunel (1806 – 1859), one of the most famous British engineers and architects.Although the two towers look similar, they are different from each other. The tower on the Clifton side has openings on both sides and the arch in the tower is more pointed on the Leigh Woods side. According to Brunel’s plans, sphinx figures were to be placed on both towers, which was very popular at the time – but they were never installed.
The Clifton Suspension Bridge, which spans the Avon River, links Clifton and Lee Woods in North Somrset County The bridge is 230 meters long, including a span of about 190 meters over the Avon River Gorge.
Interestingly, the world’s first bungee jump was made from this bridge on April 1, 1979, from a height of over 76 meters (250 feet). It was performed by four athletes from a local extreme sports club. Currently, the bridge is popular with tourists and athletes. also earned a sad reputation among suicides, for which he received the gloomy nickname “Suicide Bridge”.

Activities : sightseeing / photo opportunities, the bridge offers a unique view of the city and its surroundings. / The Bristol to Bath Railway cycle path.

Go next : visit the Observatory, which is also near the suspension bridge. It houses a “camera obscura” / Isambard Kingdom Brunel’s steam ship the SS Great Britain was built in Bristol, and is now preserved in dry dock./ caves are also popular among tourists, including the Giant Cave, the most famous of them.