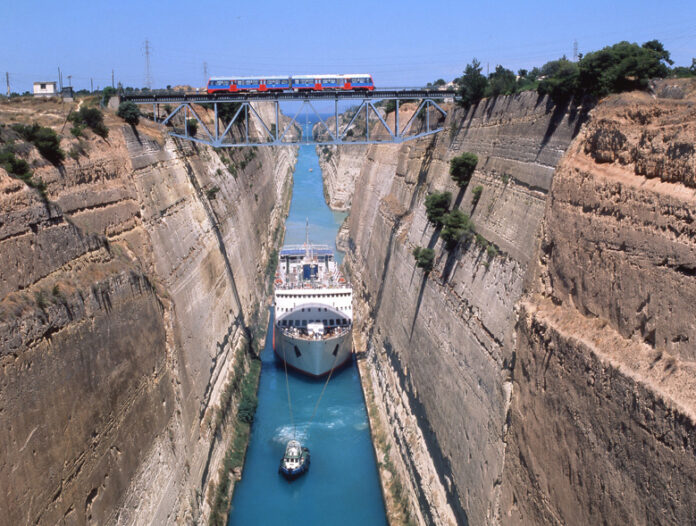 The construction of the Corinth Canal, which would connect the Ionian and the Aegean Sea, was planned even under Ancient Greece, but the scale and scope of the idea, as well as the difficulty of implementation, somehow brought all efforts to naught. Until in 1881, the joint efforts of Greeks, French and a dozen more architects from around the world developed a global plan to create a full-fledged navigable artery at this very place.

The construction lasted for 10 years, the cost was fabulous, and the result exceeded all expectations. Some 6 km of “cut” layered stony land allowed all ships following bypassing the Peloponnese to shorten their path by 400 km!
The channel is 6 kilometers long and 8 meters deep. The walls of the channel are of natural origin, mainly of limestone, the height of the walls reaches 76 meters. The channel is 25 meters wide at sea level and 21 meters wide at the bottom. One railway and three automobile bridges are thrown across the canal. Additionally, there are submersible bridges at both ends of the canal.
Currently, the man-made landmark is used and as a tourist attraction: cruise liners pass along it in tow, and small boats with tourists on board run along the waterway several times a day.

Access : Coordinates: 37.934722, 22.983889 / The Corinth Canal, which connects the Saronic Gulf of the Aegean Sea and the Corinthian Gulf of the Ionian Sea, is located in the south of mainland Greece. / The channel is located about 2 km northeast of Corinth. The easiest way to get there is by car , along the E94 motorway –  or by  excursion. When renting a boat, it should be borne in mind that a fee is charged for passage through the canal, depending on the type of boat, from 32 EUR.

Activities : photo opportunities / Bungee jumping is practiced on the canal bridges. / The eight-day Corinth Canal cruises depart from the port of Piraeus – Athens.

Go next : the western entrance to which is located 2 kilometers northeast of the city of Corinth, can be seen traveling by commuter trains from mainland Greece to the Peloponnese