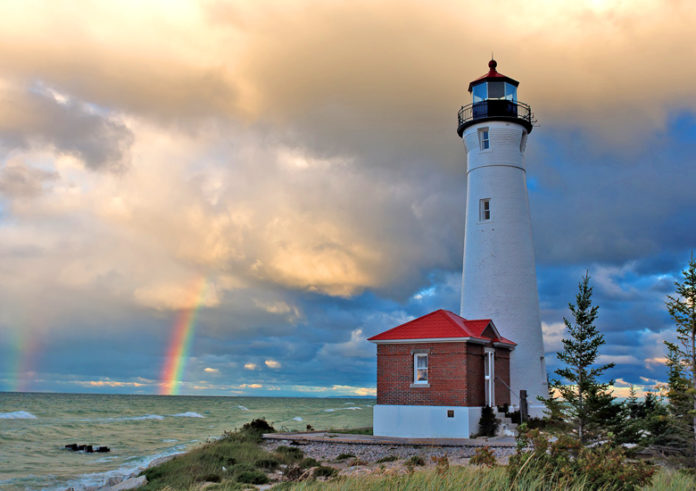 Crisp Point It was built in 1875 and became operational in 1876 , was one of five U.S. Life-Saving Service Stations that saved lives in the United States.  Along the coast of Lake Superior, between Munising and Whitefish Point, in the Upper Peninsula of Michigan.

Located approximately 14 miles (23 km) west of Whitefish Point,(  at the eastern end of Lake Superior on Michigan’s Upper Peninsula.)  in 1876 it became Life Saving Station number ten. Crisp Point is named after one of the people in charge of the Station of Salvation of Life, Christopher Crisp, who is said to have been “a man of boats with iron will”
The stretch of coastline between Whitefish Point and Grand Island became known as “The Coast of Shipwreck”. On November 10, 1975, the SS Edmund Fitzgerald sank during a violent storm. It sank in Lake Superior about 17 miles (27 km) northeast of Crisp Point. Fitzgerald’s last radio communication was with the Coast Guard station in Grand Marais.

Tip : Visiting Crisp Point Lighthouse during the winter with a vehicle should not be attempted , Beware of road though! Better have 4WD

facilities : visitor center next to the parking lot. The visitor center contains bathrooms, a very small store and a small museum ( closed during the winter )