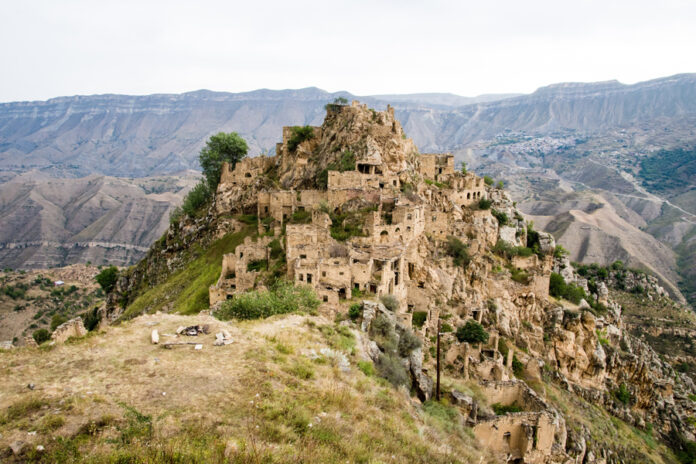 Gamsutl is a village in the in Gunib district of the North Caucasian Republic of Dagestan in the Russian Federation.

On the top of Mount Amalye, in the Gunib region of Dagestan, lies the beautiful abandoned village of Gamsutl. Historians claim that Gamsutl,is one of the oldest settlements in Dagestan, and centuries ago there was a khan’s tower or fortress.
Artifacts of various eras and religions were found on the territory of the village: Christian crosses, gravestones with inscriptions in Persian, on the facades of houses one can still distinguish Arabic script, and the door of one of them is decorated with the Star of David.

Gradually, the village grew, the population grew, and even in the twentieth century life was in full swing here. The village had shops, a school, a post office, a hospital and even a maternity hospital. A mobile cinema has arrived in the village. But the inhabitants gradually left the village, their homes, and about forty years ago the village was deserted. The reason is very prosaic: people left for just for a better life. Since then, interest in the abandoned picturesque village, as if stuck on the mountainside, has only been growing. Hundreds of tourists visit it every day.