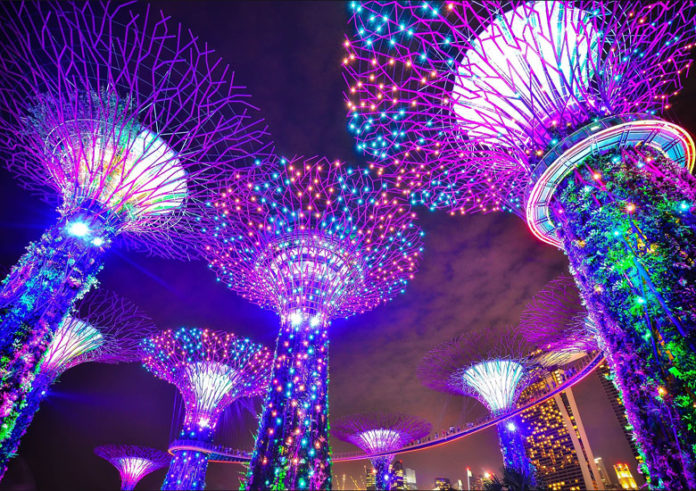 Gardens by the Bay is a nature park spanning 101 hectares (250 acres) of reclaimed land in central Singapore, adjacent to the Marina Reservoir. The park consists of three waterfront gardens: Bay South Garden, Bay East Garden and Bay Central Garden. The largest of the gardens is Bay South Garden at 54 hectares (130 acres).

Gardens by the Bay is part of a strategy by the Singapore government to transform Singapore from a “Garden City” to a “City in a Garden”. The stated aim is to raise the quality of life by enhancing greenery and flora in the city. First announced by the Prime Minister, Lee Hsien Loong, at the National Day Rally in 2005, Gardens by the Bay was intended to be Singapore’s premier urban outdoor recreation space, and a national icon.

In 2006, an international competition for the design of the park was held, attracting more than 70 entries submitted by 170 firms from 24 countries. Two British firms – Grant Associates and Dominic White – were awarded the contracts for the Bay South and Bay East Gardens respectively. Alongside the lead designers Grant Associates, the design team for Bay South included WilkinsonEyre, Atelier Ten (environmental design consultants) and Atelier One (structural engineers). They were supported by a number of Singapore firms including CPG Consultants (architecture, civil and structural, mechanical and electrical), Meinhardt Infrastructure (civil and structural), Langdon & Seah (cost consultants) and PMLink (project management).

The park is quite popular, with 6.4 million visitors in 2014, and it had the 20 millionth visitor in November 2015 / Bay Central Garden :  Bay Central Garden will act as a link between Bay South and Bay East Gardens. It stands at 15 hectares (37 acres) with a 3-kilometre (1.9 mi) waterfront promenade that allows for scenic walks stretching from the city centre to the east of Singapore.[5] More developments of Bay Central Garden are coming in the next few years

The South American garden : The Flower Dome is the lower but larger of the two, at 1.2 hectares (3.0 acres). It replicates a mild, dry climate and features plants found in the Mediterranean and other semi-arid tropical regions (e.g. parts of Australia, South America, South Africa). The Flower Dome is 38 metres (125 ft) high and maintains a temperature between 23 °C and 25 °C, slightly lower at night.

The Flower Dome features seven different “gardens” as well as an olive grove with a bistro and a central changing display field has also been incorporated to enable flower shows and displays to be held within the conservatory.

Supertree Grove : Supertrees are tree-like structures that dominate the Gardens’ landscape with heights that range between 25 metres (82 ft) and 50 metres (160 ft). They are vertical gardens that perform a multitude of functions, which include planting, shading and working as environmental engines for the gardens.
The Supertrees are home to enclaves of unique and exotic ferns, vines, orchids and also a vast collection of bromeliads such as Tillandsia, amongst other plants. They are fitted with environmental technologies that mimic the ecological function of trees – photovoltaic cells that harness solar energy which can be used for some of the functions of the Supertrees, such as lighting, just like how trees photosynthesize; and collection of rainwater for use in irrigation and fountain displays, exactly like how trees absorb rainwater for growth. The Supertrees also serve air intake and exhaust functions as part of the conservatories’ cooling systems.

There is an elevated walkway, the OCBC Skyway, between two of the larger Supertrees for visitors to enjoy a panoramic aerial view of the Gardens. A food and beverage outlet is planned atop the 50-metre (160 ft) Supertree. At night, the Supertrees come alive with a light and music show called the OCBC Garden Rhapsody. Italy’s Pavilion in Expo 2015, featured a structure called Albero della Vita (or “Tree of Life” in Italian), which proved visually similar to Singapore’s Supertrees. 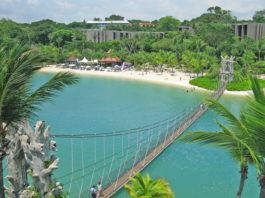