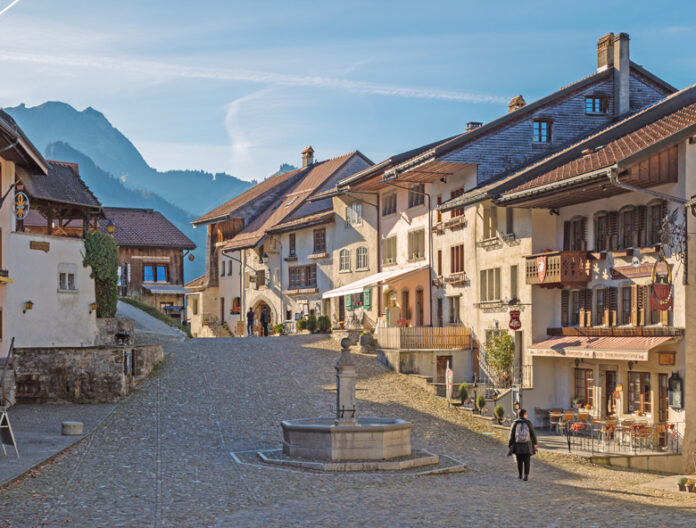 Gruyères is a picturesque town in the Swiss canton of Friborg, located in the district of Gruyère. Gruyères is located 33 km from the city of Friborg and 5 km from Bulle, at the entrance to the Intyamon valley. Like the city of Bulle, it occupies a position of contact between the Swiss Plateau and the Friborg Prealps.

The founder of the settlement is considered to be Gruerius, the leader of the Vandals. He was looking for fertile land where he could found a city. Rising by the banks of the Sarina River, he saw a beautiful place surrounded by mountains and generously illuminated by the sun. The land was uninhabited, however, Gruerius decided to lay the walls of the castle here.

According to legend, when the construction was completed, a snow-white crane fell from the sky. The leader saw in this a good omen, and from that day on, the coat of arms of Gruyerius and the modern city of Gruyeres has been adorned with a crane.
The medieval town is an important tourist destination at the entrance to the upper Saane valley.

Go next : Moleson ski resort : The largest ski area, Moleson, is located near the town of Gruyeres / Fribourg – capital of the canton of Fribourg in Switzerland.