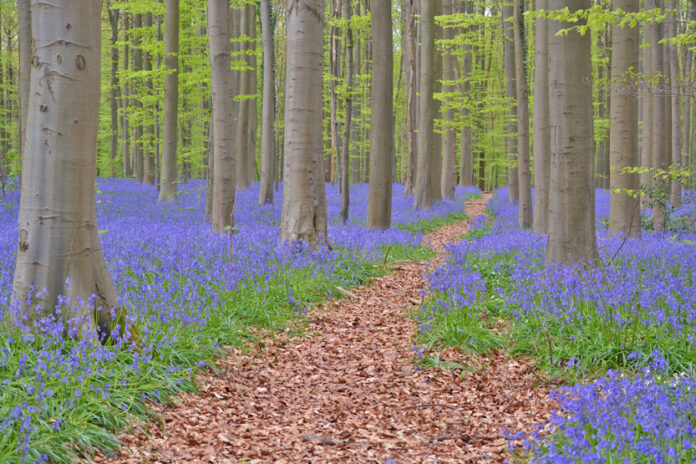 The Hallerbos  is a mixed forest in the province of Vlaams-Brabant near Halle in Belgium.

Hallerbos (Dutch expression for Halle forest) is a forest located in Belgium which covers 552 hectares. Mainly located in the municipality of Halle, it also develops partially in the Province of Flemish Brabant and, to a lesser extent, in Walloon Brabant.
Historically, Hallerbos was part of the Silva Carbonaria, as well as other nearby forests, including Soignes and Meerdaal. In 1777 it was still connected by a thin strip of green to the Soignes forest. During the First World War, most of the old trees were felled by the German imperial army, engaged in fighting in this geographical area. The reforestation took place between 1930 and 1950.
In the second half of April, these beautiful flowers with deep blue bells cover the forest with a thick carpet, making an amazing contrast to the young green leaves. The forest looks inimitable most of all people tend to visit it at the end of April or at the beginning of May.

Access : Coordinates: 50.704, 4.288 / The forest is located in the immediate vicinity of the town of Dwarp, and it is separated from Brussels by no more than 30 minutes by car.Visitors can reach there either by their own vehicle or through public transportation

Go next : The town of Dwarp / Belgium’s heritage site, Beersel Castle, 6.5 kilometers away, is a great destination to visit. / The Egmont Palace complex, located nearby / The nearest monument – Sint Martinusbasiliek /Sint-Martinus Basiliek Halle – a cult cathedral for Belgium.