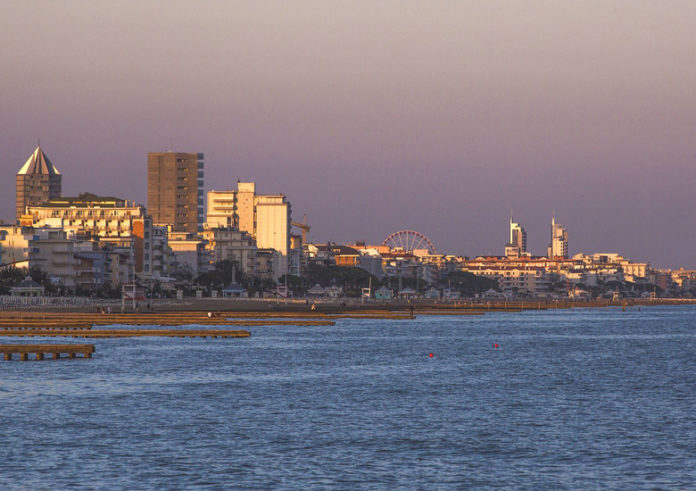 Jesolo is a seaside resort on the Veneto coast, in the province of Venice in Veneto, Italy.

Jesolo stretches from the main town inland to the Adriatic coast known as Lido di Jesolo. Its sandy beach stretches between the mouth of the Sile River and that of the Piave River for about 12 km. Lido di Jesolo is a popular seaside resort during the summer season and one of the largest beaches in northeastern Italy.

One of the most popular Italian beaches, Jesolo records about 1.2 million arrivals every year for 5.4 million official presences, figures that place it in seventh place overall in Italy among tourist destinations, and the third, behind Rimini and Cavallino-Treporti, among the Italian seaside resorts . With 204,711.4 presences per thousand inhabitants, it is also one of the 50 Italian municipalities with the greatest tourist pressure .

The history of Jesolo is closely linked to that of Venice, as heir to the ancient lagoon city of Equilio, one of the founders of the lagoon league that would later lead to the birth of Venice.
The west side of the municipal territory borders the lagoon of Venice, which is part of it and is therefore part of the site which is a UNESCO World Heritage Site since 1987. Since 2007, Jesolo has been a member of the Steering Committee of the UNESCO website.

Access : Coordinates: 45.533889, 12.640833 / By car :
A4 section VE-TS exits of Cessalto, San Dona / Noventa di Piave, Meolo and Quarto d’Altino, in addition to the various exits indicated in A57 and the Mestre ring road, with indications for Jesolo or sea. From the various motorway exits or in any case in the ordinary roads there are numerous signs with directions.
/ By train :
The nearest stations are those of San Dona di Piave, Meolo, Musile di Piave / Fossalta di Piave, Mestre, Venice and Quarto d’Altino.
/By boat :
Coming from the historic center of Venice, there are the ACTV waterbuses or ferry boats that connect Venice and its Lido with Punta Sabbioni, here are ATVO city buses with intermediate stops both in the municipality of Cavallino-Treporti and in that one of Jesolo, with the final destination of the Jesolo Lido bus station.

By plane : The nearest airports are : Verona Airport , Caselle di Sommacampagna, Treviso Airport , via Noalese 63 / Venice Airport .
The last two are very connected with Lido di Jesolo which, through frequent shuttles during daytime, connect the airports to Venice or Jesolo.

Get around : There is a bus service provided by ATVO (Eastern Veneto Transport Company) that connects Jesolo Lido with the main cities of the Veneto region, via San Dona di Piave and Venice / Mestre with daily buses to / from the train station and airport, also provides a urban bus service covering the whole coast. The bus station is located in Jesolo Lido in via Equilio, near Piazza Drago and a few minutes walk from the beach.

Activities : Sailing and windsurfing / Minigolf / Diving / night – clubs / Cycling, Along the sandy coast, there are 500 kilometres of cycling tracks / horse-riding routes / relaxation on the beach / day trip to : Venice – Burano, Torcello and Murano / Sport fishing
go-kart at the Pista Azzurra di Jesolo / Pirate Cruise : on board of an old-fashioned Venetian ship / kids’ fun park with inflatable and foam rubber facilities.