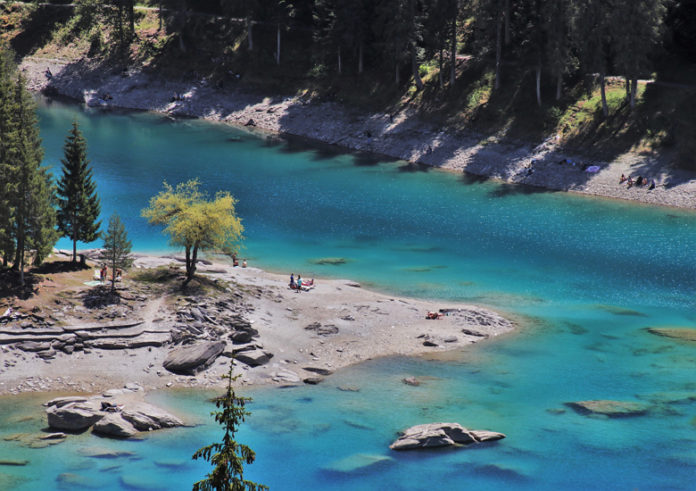 The Caumasee is a lake located near Flims, in the Swiss canton of Grisons.

The lake is fed by underground sources. The level of the lake varies by approximately 4 to 5 meters along with the varying underground water flow during the year. It is about at  997 meters altitude  and can be reached via a specially constructed funicular.

Since 1937, a funicular of 125 meters leads down to the lake. The Caumasee lift is in operation during the summer season, its use is free. During the bathing season, a reasonably priced entrance fee will be charged in the infrastructure area.
The lake is a popular spot in summer , Especially in early summer, the lake has comparatively high temperatures, because of the lower volume on the still low water level and the underground feed.

Access : Coordinates: 46.820278, 9.295833 / Address: Via Dil Lag (nearest road), Caumasee, 7017 Flims / By car : Caumasee is about a 10 minute walk from Flims Waldhaus, about 1hr30 by car from Zurich.
Parking is available in Flims Waldhaus – from the car park you can reach the lift within 10 minutes / By public transport : From Graubunden , The postbus stop is called “Flims Waldhaus Caumasee”, from here you can reach the lift in 15 minutes on foot or after another 15 minutes on forest roads the turquoise blue Lake.
By lift , bike or on foot : By bike :  Electro-Bikes are available to rent from the base station in Flims , from Flims Waldhaus playground or from Flims Waldhaus Post comfortably on forest roads through the Flims forest to Lake Cauma.
By foot : Flims Waldhaus is the best starting point for this. An idyllic path leads from there through the forest to Lake Cauma.
The lift runs throughout June and August from 08:00 to 17:00, or when the restaurant is open.
By train : train to Chur, then a bus to Flims Waldhaus, Caumasee.