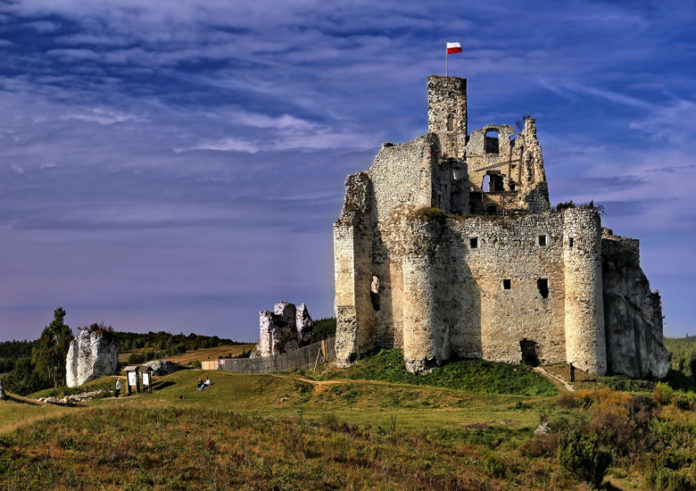 Located among picturesque rocks, one of the most beautiful castles in the Krakow-Czestochowa Upland. Mirow Castle was built during the reign of Casimir the Great around the mid-fourteenth century, although it is supposed that there were previously wooden and earth buildings in this place. Initially, the stronghold was made of a stone watchtower that was subordinate to the nearby Bobolice Castle, which, along with it, was part of the defense system known today as the “Eagle’s Nest”.

At the end of the 14th century, the Mirow Castle became the property of Krystyna from Kozieglow, later passing into the hands of successive knight families. The times of the greatest magnificence of the castle began at the end of the fifteenth century. It was then owned by the Myszkowski family, who expanded the stronghold to the size of an ancestral seat and ruled it for 144 years by appointing “Margrabiami na Mirowie” (Marchio de Mirow). Mirow castle suffered heavily during the “Swedish Deluge” when a significant part of the walls were destroyed. Despite the renovation work undertaken by the owners, it slowly fell into disrepair and was finally abandoned in 1787. The stronghold became a source of stone building material for local residents, which accelerated its devastation.

In 2006, the Lasecki family – the current owners of the Mirow Castle – began protecting works aimed at saving this valuable monument. At the request of family representatives: Senator Jaroslaw W. Lasecki and his brother Dariusz Lasecki, a number of studies were initiated, based on which the most optimal way of securing the Mirow ruins was elaborated. The works are carried out under the supervision of the best specialists in Poland. Currently, it is not possible to explore the interior of the castle, which due to the threat posed to tourists had to be fenced. Ultimately, the Mirow Castle will be made available for tourism, and a partial reconstruction of the collapsed walls is also planned. In the secured and adapted rooms there will be a tourist service center and a museum

The city of Mirow can not be reached by public transport. Buses from Myszkow and Zarek reach Bobolice and Niegowa. From both of these towns, you can reach Mirow on the red trail of the Eagles’ Nests, around 2 km from Bobolice and about 3 km from Niegowa. When planning a trip,  buses to Niegowa run more frequently than to Bobolice. You can easily get to Myszkow by train Gliwice – Czestochowa. I suggest traveling by car from Gliwice on the A4 motorway to Katowice, then towards Warsaw via the S86 expressway to Siewierz. From Siewierz DK 793 to Zarki and then DK 789 to Niegowa. From Niegowa the local road leads to Mirow. Distance: one way less than 100 km. Near the castle ruins there is a parking lot where you can leave your car.

The Trivago announces the incorporation of HomeAway on its hotel search...