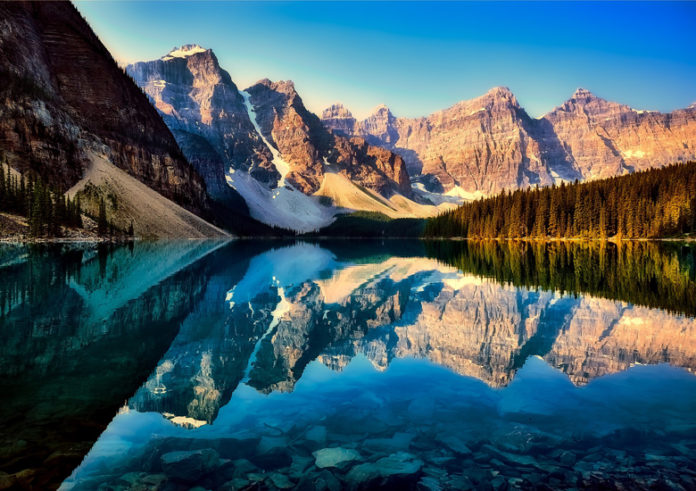 Together with six other national parks it makes up the UNESCO World Heritage site “Canadian Rocky Mountain Parks” ) in Alberta, Canada. More specifically, it is located in the Valley of the Ten Peaks , about 14 kilometers away from the town of Lake Louise and at an altitude of about 1884 meters above sea level.

Lake Moraine, with a total area of half a square kilometer, is fed thanks to a glacier. Therefore, it reaches its maximum level during the second half of the month of June. Its striking blue color, characteristic of the lakes in the area of the Icefields Parkway, comes from the refraction of light due to rock dust deposited from the mountains.

Around the lake there are several hiking trails that are sometimes closed due to grizzly bears. The Canadian government agency Parks Canada, concerned with the preservation of the environment, provides information on the state of the roads and the restrictions of passage.
The easiest path is also the most frequented by tourists. The route Rockpile is about 300 meters long and a drop of only 24 meters. The view of the lake from the top of the rocks is one of the most photographed in Canada.2 That view is also known as the Twenty Dollar View, the “Twenty Dollar View”, as it appeared on the back of the banknotes of twenty Canadian dollars of 1969 and 1979.

Access : Coordinates:51.3225, -116.185556 / From Highway 1, which is the Trans-Canada Highway, runs through the park along its entire length. The park is about an hour and a half drive from Calgary, Alberta’s largest city, and about the same distance from Golden, British Columbia. It is also possible to reach the park by car from Jasper via the Icefields Parkway and from Red Deer via Highway 11. From British Columbia, it can be reached by highway. 93 which passes by Cranbrook.
The road to Moraine Lake is closed during the winter due to heavy snowfall and high avalanche risk.
By plane :
The closest international airport to the park is Calgary. Although Banff has an airstrip, there are no commercial flights. To land directly in the park, you need a chartered flight; which is very expensive. Vancouver International Airport is about 12 hours drive west of the park. In addition, Springbrank Airport located west of Calgary is approximately 80 km away.
There are various shuttles connecting the park and the Calgary Airport.
shuttle options :
several departures from downtown Calgary, Crowfoot LRT, and Somerset-Bridlewood LRT to Canmore and Banff /
There are multiple daily departures from the village of Lake Louise and explore either the Lake Louise lakeshore or Moraine Lake.
from the Lake Louise lakeshore to Moraine Lake, departing every 20 minutes from 8:40 a.m. to 4:00 p.m., with shuttles returning to the Lake Louise Park and Ride.

permits : A pass is required to stop in the park. Park staff conduct regular checks, especially in the summer. This pass is not necessary if you only cross the park on the Trans-Canada Highway without stopping. Entrance fees and user fees are used to fund park facilities and visitor services. Admission fees are per day, but an annual pass, called a “discovery card”, is available. The Discovery Map also gives access to 26 other national parks and 77 participating national historic sites. Note that the annual pass becomes more advantageous than daily passes after only 7 days.

Get around -RV tips : Park your RV at your campsite or at designated RV lots, as marked – Use transit and shuttles to explore the park.