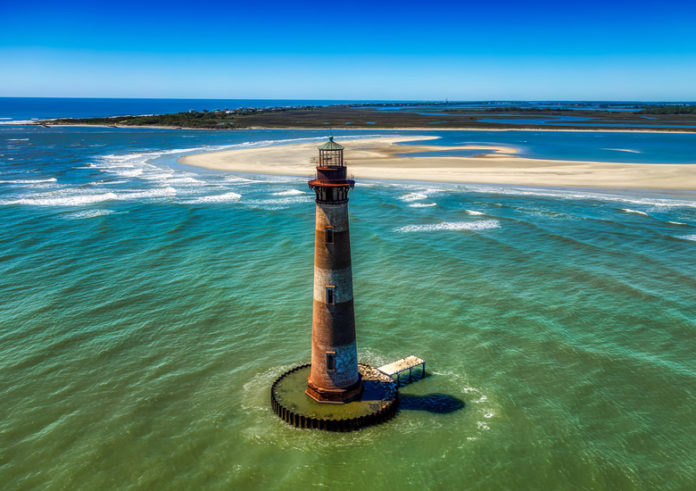 Morris Island Light is a lighthouse on Morris Island in South Carolina. The light stands on the southern side of the entrance to Charleston Harbor, north of the City of Folly Beach.- Unites States.

The lighthouse was named to the National Register of Historic Places in 1982. Although the lighthouse now stands several hundred feet offshore, it was originally inside a much larger island. When constructed in 1876, the light was approximately 1,200 feet (370 m) from the water’s edge. However, the construction in 1889 of the jetties which protect the shipping lanes leading to Charleston Harbor altered ocean currents, resulting in the rapid erosion of Morris Island and the destruction of many structures and historical sites (such as Fort Wagner).

By 1938 the shoreline had reached the lighthouse, forcing its automation as it was no longer safe or practical to keep it manned. In 1962 the Morris Island Light was decommissioned and replaced by the new Charleston Light, located on Sullivan’s Island at the north end of the harbor.

Access : Coordinates: / 32.695278, -79.883611 / Location : Morris Island, South Carolina (Charleston harbor , entrance) / By boat : there are boat riding options from the  marshal Islands that gets you to this Islet. /The Morris Island Lighthouse can best be seen from the northeast end of Folly Beach.( SC 171  Folly Beach, SC 29439 ) Take East Ashley Street until it ends. There is a parking lot there and then it is about a 1/4 mile walk to the beach./
Admission : Free