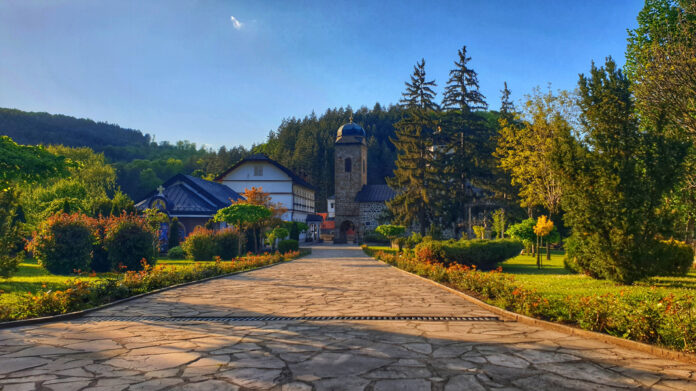 Ozren Monastery  is a Serbian Orthodox monastery located in Bosnia and Herzegovina, in the territory of the village of Kaluđerica and in the municipality of Petrovo.

Founded around 1157, it is inscribed on the list of national monuments of Bosnia and Herzegovina.The monastery is dedicated to the Holy Father Nikolaj, and it was named after the mountain of the same name on which it is located.
The first written mention of the monastery is in the temple itself in the inscription above the entrance door from 1587, in which it is written that priest Jakov patos the church. It is assumed that the construction of the existing temple began a few years earlier on the foundations of the original church from the time of King Dragutin. During the time of Abbot Jakov, he painted the church in 1605/06. year painter, priest Strahinja, and the testimony of this was left by the fresco painter himself, signing in several places in the temple. During the conservation of this fresco in 2012, the remains of an even older one were found – proof that the history of the monastery goes even further into the past.

the Ozren Monastery, located on the mountain of the same name in the area of ​​Kaludjerica near Petrov, is unique in the Serbian Orthodox Church in organizing the Saint Sava Youth Camp, with the goal of enabling the spiritual maturation of young people in today’s alienation from family, nature and values.The monastery has been included in the list of national monuments of Bosnia and Herzegovina since 2003.

Access : Coordinates:44.598333, 18.331111 / The Ozren anastir is located in the Kalugjerica settlement, in a forest 7 km south of the village of Petrovo, Republika Srpska, BiH / The monastery is located halfway between Tuzla and Doboj, 6 km. from the municipal center.