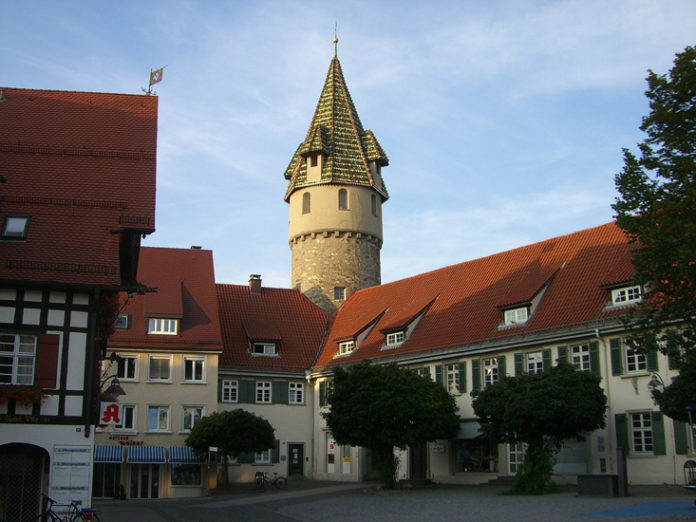 Ravensburg is a town in Upper Swabia in Southern Germany, capital of the district of Ravensburg, Baden-Wurttemberg.

Ravensburg was first mentioned in 1088. In the Middle Ages, it was an Imperial Free City and an important trading centre. The “Great Ravensburg Trading Society” (Große  Ravensburger Handelsgesellschaft) owned shops and trading companies all over Europe. The historic town centre is still very much intact, including three town gates and over 10 towers of the medieval fortification. “The all-white Mehlsack (Flour Sacks) is a tower marking the Altstadt’s southern edge. A steep staircase leads up to the Veitsburg, a quaint baroque castle.”

History :  Ravensburg was first mentioned in writing in 1088. It was founded by the Welfs, a Frankish dynasty in Swabia who became later Dukes of Bavaria and Saxony and who made the castle of Ravensburg their ancestral seat. By a contract of inheritance, in 1191 the Hohenstaufen Frederick Barbarossa acquired the ownership of Ravensburg from Welf VI, Duke of Spoleto and uncle of both Frederick Barbarossa and Henry the Lion.
With the death of Conradin 1268 in Naples the Hohenstaufen line became extinct. Their former estates became imperial property of the Holy Roman Empire. Like many other cities in Swabia, at the end of the 13th century Ravensburg became an Imperial Free City in 1276. Ravensburg landscape showing local landmarks: 23. Weinberge with Torkeln  24. St. Christina; 25. Veitsburg; 26. Ravensburg with Mehlsack. Most of the hillsides are shown covered with vineyards. From Kloster Wei?enau (stylized print by Johann Mathias Steidlin, 1734).
The “Great Ravensburg Trading Society” (Große  Ravensburger Handelsgesellschaft) was founded at Ravensburg and Konstanz around 1380 by the merchant families of Humpis (from Ravensburg), Motteli (from Buchhorn, modern-day Friedrichshafen) and Muntprat (from Constance). At first, the society mostly dealt in the production of linen and fustian. With the opening of one of the first paper mills north of the Alps in 1402 in Ravensburg, paper became another commodity.

Following the Reformation a “paritetic” government emerged, meaning an equal distribution of public offices between the Catholic and Protestant confession. The city council was one half each Protestant and Catholic. For some time there was even a Catholic and a Protestant mayor at the same time, and the both confessions celebrated the village fair, the “Rutenfest”, apart from each other. This system was approved at the end of the Thirty Years’ War in the Peace of Westphalia (1648) which named four “Paritetic Imperial Cities” (German: Paritatische Reichsstadte): Augsburg, Biberach, Dinkelsbuhl and Ravensburg. In 1803 the Immerwahrende Reichstag passed the Reichsdeputationshauptschluss, a bill which included the secularisation and mediatisation of many German states — the first meaning the confiscation of the estates belonging to the church, the second the incorporation of the imperial estates and Imperial Free Cities into larger regional states. As a result, Ravensburg first became a Bavarian exclave within Wurttemberg. After a swap of estates between Bavaria and Wurttemberg it was incorporated in the Kingdom of Wurttemberg in 1810. Since Ravensburg was impoverished and depopulated after the Thirty Years’ War, only a few new buildings were raised during the 18th and the early 19th century. The benefit of this economic stagnation was the conservation of a widely intact medieval city with nearly all towers and gates of the historic fortification.

20th century :  During World War II Ravensburg was strategically of no relevance. Ravensburg did not harbor any noteworthy arms industry (unlike nearby Friedrichshafen with its large aircraft industry), but was home to a major aid supplies center belonging to the Swiss Red Cross. The historic city center was not damaged by air raids. In the 1970s, Ravensburg increased in population and territory by the incorporation of smaller communities like Eschach, Schmalegg and Taldorf. Ravensburg University of Cooperative Education was established in the town in 1978. In the 1980s, the Old Town was renovated and all transit traffic was banned from the city center

Access : Coordinates: 47.783056, 9.611389/ By plane :  Ryanair offers direct flights from London, Liverpool and Dublin to Friedrichshafen airport, which is about 20 minutes away by train. Most major European airlines offer regular scheduled flights to Stuttgart, Munich and Zurich airports, all of which are approximately 3 hours away by train. There are many intercontinental flights to Munich and Stuttgart has a direct connection to Atlanta in the USA. By car :  Ravensburg has fast road connections to Ulm and Friedrichshafen. The nearest motorway (Autobahn) junctions are at Wangen (20 miles) and Ulm (60 miles). By train :  Ravensburg station is on the Wurttembergische Sudbahn Ulm–Friedrichshafen and the Bodensee-Oberschwaben-Bahn lines. The city’s 1 train station is a ten-minute walk from the main pedestrian precincts

Activities : There is plenty to do in Ravensburg, there is a fantastic amount of shops, cafes and bars, which are all located on and around the main square. 1 Ravensburger Spieleland, Am Hangenwald 1, Meckenbeuren. Family amusement park.