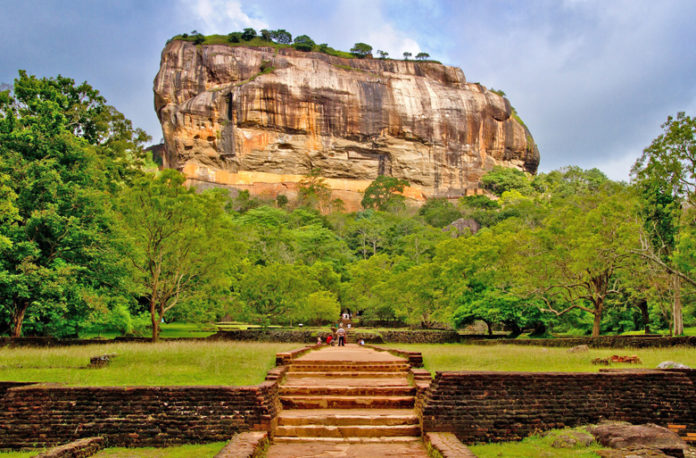 Sigiriya or Sinhagiri  or the Lion’s Rock is an  ancient rock fortress – archaeological site located in the Matale district, in the Central province of Sri Lanka.

It contains the ruins of an ancient palatial complex, built during the reign of King Kasyapa (477-495).
Sigiriya is presumed to have been inhabited since prehistoric times. It was used as a monastery nestled in the rock since the 3rd century, with caverns prepared and donated by Buddhist devotees.
The Garden and the palace were built by Kasyapa. After the death of Kasyapa, it remained a monastic complex until the fourteenth century, after which it was abandoned. The ruins were discovered in 1908 by British explorer John Still.

The “Ancient City of Sigiriya” is listed as a UNESCO World Heritage Site  since 1982. It consists of two rectangular enclosures surrounded by two trenches and three embankments where two palaces are located.
The entrance to the site is located on the western side of the complex, where a small museum is located.
Today the massive column of rock nearly 200 metres (660 ft) high It is one of the most popular tourist destinations in the country.

Access : Coordinates: 7.956944, 80.759722 / To reach Sigiriya from the Bandaranaike International Airport in Colombo, it takes just over 3 hours by car. /
There are options in public transport such as train and bus that although they take twice as long they have good prices. Keep in mind that these transports do not reach the archaeological site and forces you to take a taxi that makes the journey more expensive.