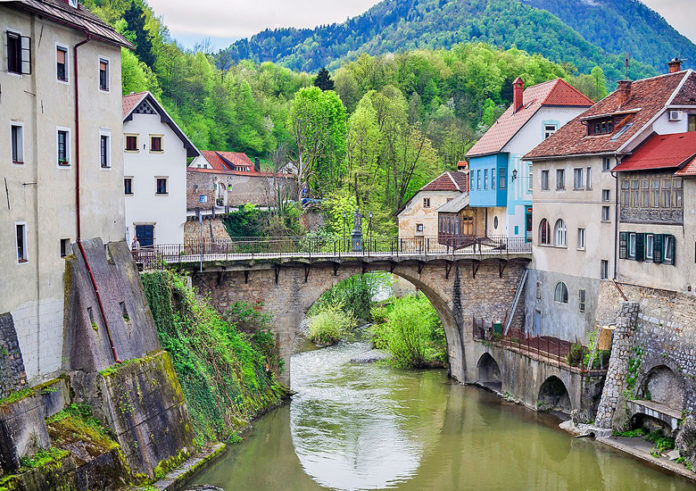 Skofja Loka is a medieval town in Slovenia,( considered to be the best preserved medieval town center in Slovenia ) the center of the Municipality of Škofja Loka in Upper Carniola.. It is located 15 km northwest of Ljubljana, at the merger of the Polje Sora River and the Sora Sora River. It is mentioned for the first time in 973, when it became a possession of the bishops of Freising, under whose authority it remained until its accession to the Austrian duchy of Krajina in 1803.
Coat of arms : An interesting feature of the Skofja Loka coat is a fatigue. According to the legend, one of Freising’s landlords, Abraham, drove to the Poljanska Valley, while he was attacked by a bear. The Zamorec, who was his subject, did not fear the bear and killed him with an arrow. In thanking him, the bishop promised that “he will make him famous, that many generations will remember him”. The Zamorec with the crown became the symbol of the Freising diocese, and consequently also the town of Skofja Loka.

Access : Coordinates: 46.167219, 14.303039/ By rail :
There is a railway station here. The suburban trains from Ljubljana arrive here./ By plane
In the vicinity there is Ljubljana Airport. LOT Polish Airlines and Adria Airways offer direct flights from Warsaw and other destinations.
By car : In Skofja Loka, several roads cross into the Poljanska and Selska valleys, connecting the Idrija and the northern Primorska, one towards Kranj and two towards Ljubljana.Ljubljana to Skofja Loka – about 30min drive , Bled to Skofja Loka -about 40min drive

Attractions :
Skofja Loka Castle & Museum , Grajska pot 13 Skofja Loka, Skofja Loka 4220, The castle was administered by Loka chiefs, among them Lambergs, Thurms, and Rasps. Since 1890 the castle has been managed by the Ursulines, who pulled down the Romanesque yard tower and transformed it into a school. Since 1959 it has hosted the Loka Museum.
Ponte Dei Cappuccini , Kapucinski trg, Skofja Loka, Historical landmark, The bridge over Selska Soro, built in the middle of the 14th century ,
Skofja Loka Museum , Grajska pot 13, Skofja Loka 4220, The museum is located above the city centre and contains archaeological exhibits and crafts
Zupnijska cerkev Sv. Jakoba , Cankarjev trg 14, Skofja Loka 4220, 15th century gothic church
La Casa di Holman (Homanova Hisa) , Mestni trg 2, Skofja Loka 4220, On Main Street in the old town , a medieval home dating back to 1511
Mount Blegos , Blegos is a 1562 meters high mountain which lies south of the Julian Alps in Slovenia. It’s a very popular destination for hikers because the trail is not technically difficult.
Marian and Holy Trinity columns , Mestni Trg | Old Town Square, Skofja Loka, This memorial is located on Mestni trg,Town Square ,column was in cities main square erected while city was saved from plaque and fire in 18th century.
Hudiceva Brv V Skofji Loki , Kidriceva 1a, Skofja Loka, Devil’s footbridge , Wooden footbridge with a sign, which got its name after the exposition of the devil, connects the settlement Pustal with Skofja Loka.
Capuchin Church , Kapucinski trg 1, Skofja Loka 4220, 18th century church with monastery in behind with wast library , Close to Capuchin bridge.
Eglise Marie de l’Annonciation de Crngrob , about 4 km from the bus station in Loka , Pilgrimage Church of Annunciation.
Dvorec Visoko – Tavcar’s mansion at Visoko- , Visoko pri Poljanah 1, Skofja Loka 4220, The 17th-century rustic mansion lies in the embrace of surrounding hills and forests not far from Poljanska Sora
The Alley of Famous Loka People , Solska ulica, 4220, Skofja Loka . bronze bust statues of people from Loka who, through their work and activities.
Zigon’s House , Mestni trg 14, 4220, Skofja Loka , former merchants’ mansion from the 16th centure is notable for its stonemasonry detail and vaulted archway.
The Granary , Spodnji trg 1, 4220, Skofja Loka , The building stood in its original form prior to the 1511 earthquake, after which it was completely renovated.
The Old Rectory , Mestni trg 38, 4220, Skofja Loka ,

Activities : sightseeing / photo opportunities / Castle tours / Cycling , In the embrace of the Skofja Loka hills and valleys, hundreds of kilometers of marked and arranged biking trails are taking place./
Hiking , many well-organized and marked hiking trails leading to the peaks from which an unforgettable view goes far./ Winter sports , The white idyllic area of the Skofja Loka region offers the possibility of many active experiences/
Fishing , the area along the Sora also the possibility of fishing, as it is rich with trout, tartar, grayling and more…/
excursions on the horse / Swimming pools / carriage ride.