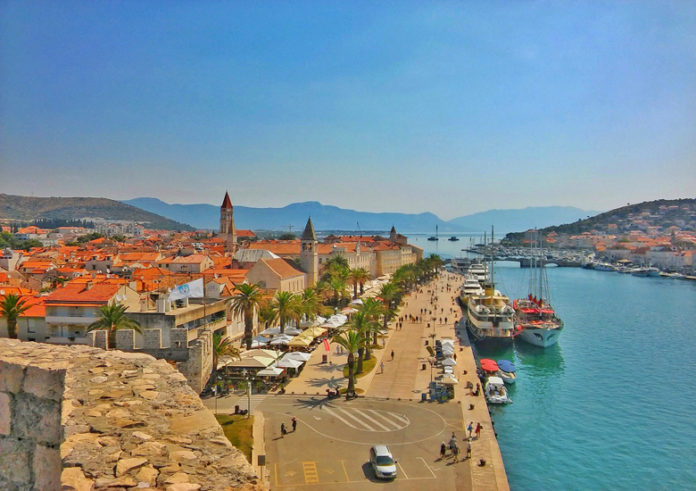 Trogir is a historic town and harbour on the Adriatic coast in Croatia, with a population of approximately 13,000. Today it is part of the greater Split metropolitan area or conurbation which numbers over 400,000 inhabitants. The medieval town is a popular day trip from Split. The historic city of Trogir is situated on a small island between the Croatian mainland and the island of Ciovo. It lies 27 kilometres (17 miles) west of the city of Split. Trogir is in UNESCO list of World Heritage Sites for its Venetian architecture.

History : In the 3rd century BC, Tragurion was founded by Greek colonists from the island of Vis, and it developed into a major port until the Roman period. The name comes from the Greek “tragos” (male goat – Τράγος ). Similarly, the name of the neighbouring island of Bua comes from the Greek “voua” (herd of cattle). The sudden prosperity of Salona deprived Trogir of its importance. During the migration of Croats the citizens of the destroyed Salona escaped to Trogir. Initially the Roman Tragurium was one of the Dalmatian City-States. From the 9th century on, Trogir paid tribute to Croatian rulers and to the Byzantine empire. The diocese of Trogir was established in the 11th century (abolished in 1828; it is now part of the Roman Catholic Archdiocese of Split-Makarska and has temporarily been a Latin titular bishopric) and in 1107 it was chartered by the Hungarian-Croatian king Coloman, gaining thus its autonomy as a town. In the year 1000 the Republic of Venice received submission from the Tragurium inhabitants and the city started since then to have commerce with the Italian peninsula enjoying cultural and economic improvements.

In 1123 Trogir was conquered and almost completely demolished by the Saracens. However, Trogir recovered in a short period to experience powerful economic prosperity in the 12th and the 13th centuries, with some autonomy under Venetian leadership. In 1242 King Bela IV of Hungary found refuge there as he fled the Mongols. In the 13th and the 14th centuries, members of the Subic family were most frequently elected dukes by the citizens of Trogir; Mladen III (1348), according to the inscription on the sepulchral slab in the Cathedral of Trogir called “the shield of the Croats”, was one of the most prominent Subics. In Dalmatian, the city was known as Tragur.

After the War of Chioggia between Genoa and Venice, on 14 March 1381 Chioggia concluded an alliance with Zadar and Trogir against Venice, and finally Chioggia became better protected by Venice in 1412, because Sibenik then became the seat of the main customs office and the seat of the salt consumers office with a monopoly on the salt trade in Chioggia and on the whole Adriatic Sea.

In 1420 the period of a long-term Venetian rule began and lasted nearly four centuries, when Trau (as the city was called by the Venetians) was one of the best cities in the Balkans with a rich economy and plenty of Renaissance works of art and architecture. In about 1650, a manuscript of the ancient Roman author Petronius’ Satyricon was discovered in Trogir containing the ‘Cena Trimalchionis’ (‘Dinner of Trimalchio’) the longest surviving portion of the Satyricon, a major discovery for Roman literature. On the fall of Venice in 1797, Trogir became a part of the Habsburg Empire, which ruled over the city until 1918, with the exception of Napoleon Bonaparte’s French occupation from 1806 to 1814 (when the city was part of the Napoleonic Illyrian Provinces ).

After World War I, Trogir, together with Croatia, became a part of the State of Slovenes, Croats and Serbs and subsequently, the Kingdom of Yugoslavia. During this period Italian speakers, who until 1918 were the present in the city left for Italy. During World War II, Trogir was annexed by Italy and was part of the Italian Governorate of Dalmatia. Subsequently, Tito’s Partisans occupied it in 1944. After that it belonged to the second Yugoslavia, and since 1991 to Croatia.

Bus #37 (Trogir-Split) (departs from the east side of the bus station). A journey takes about 10 min. Buses are scheduled every 20 minutes during the day and every 30 minutes in the evening and on Sundays. 13 kn.
Taxi (in Trogir the closest 2 taxi rank is located across the road at the west side of the bus station). about 100 kn, but it’s worth checking with the driver beforehand.
Friendly local. If going to the airport from Trogir bus station then some local might offer you a lift for half of the official price. About 50 kn.
By bus : 3 Autobusni kolodvor Trogir (Bus station). The station is a hub for local, regional and intercity buses. Regional bus #37 connects Trogir with the city of Split and the airport and Kastela – a chain of settlements along the Kastelanski Bay.
By car : Trogir is in about 25 km (30 minutes by car) from the centre of Split.

Attractions : 1 Crkva sv. Lovre (St. Lawrence Church). Famous for its spectacular carved portal it is a former cathedral of Trogir. It is also known as St. John’s Cathedral (Sveti Ivan) after bishop John, who died in 1111.
2 Knezev dvor. A 15th-century town hall.
3 Kastel Kamerlengo (Kamerlengo Castle) (at the waterfront). This tiny 14th-century fortress was built to control access to the harbor and the bay of Kastela. . You walk on top of the walls and go to the top of the big tower and enjoy the view over the town. 25 kn

Activities : Explore stunning beaches, spectacular islands with lavender-covered hills, small medieval and renaissance towns and Roman ruins characterize the intriguing strip of land that comprises Central Dalmatia. Warm Dalmatian hospitality and cheer is sure to capture your soul as you explore the quaint towns and old fishing ports.

In Poljica you can take peaceful evening walks free of modern day noise. In the village you can find a restaurant, shop and cafe bar. Peaceful place for leisure time on the reach of attractive destinations (Trogir, Split, Sibenik, etc.)