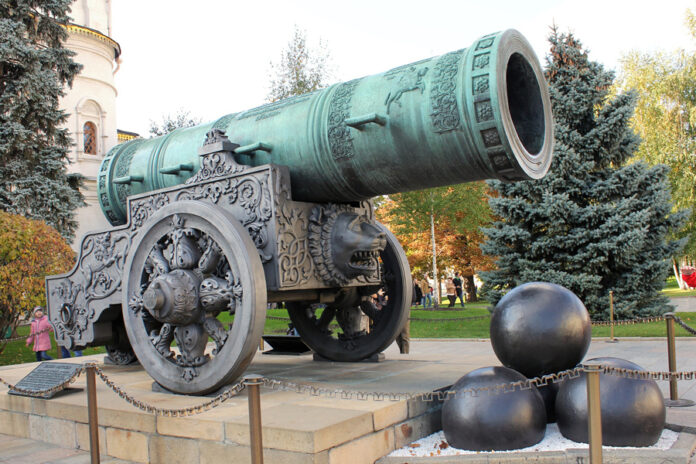 The Tsar Cannon is a large early modern period artillery piece. A tremendous cannon and a working weapon, although it is believed that she never fired. represents a striking monument to the artillery and the casting technology of early modern Russia.Today it is exhibited in the grounds of the Moscow Kremlin.Russia.

The powerful weapon is on a decorative cast-iron gun carriage, and next to it there is some  hollow decorative cast-iron cannonballs weighing 1.97 tons, cast in 1835 (the cannon cannot shoot such cannonballs). The gun is cast from bronze, the carriage is cast iron. At the vent on the right side, Fyodor Ivanovich is depicted riding a horse in a crown and with a scepter in his hand. Above the image there is an inscription: “By God’s grace, the Tsar, Grand Duke Fyodor Ivanovich, Sovereign Autocrat of All Great Russia.” According to one version, thanks to the image of Fyodor Ivanovich, the Tsar Cannon got its name. According to another version, it is called so because of its large size. Also, the gun was called “Russian Shotgun”, since it was designed for shooting “shot” (buckshot)

The Tsar Cannon was cast by the famous Russian master Andrei Chokhov  by order of Tsar Fyodor Ioannovich. The giant cannon weighing 2,400 pounds (39,312 kg) was cast in 1586 at the Moscow Cannon Yard. The length of the Tsar Cannon is 5345 mm, the outer diameter of the barrel is 1210 mm, and the diameter of the bulge at the muzzle is 1350 mm.
The length of the gun is 5.34 m, the outer diameter of the barrel is 120 cm. The caliber is 890 mm. Weight – 39.31 tons. On the left side there is an inscription: “The cannon was made by the cannon writer Ondrei Chokhov.”

Some experts believe that the great weapon never fired, but was made in order to frighten foreigners, including the ambassadors of the Crimean Tatars. Inspection of the gun in 1980 at the Artillery Academy. Dzerzhinsky showed that the Tsar Cannon is a bombard and is intended for firing stone cannonballs. The weight of the stone core was about 819 kg, and the cast iron core of this caliber weighs 1970 kg. Examination of the gun channel showed the presence of powder particles. This means that the famous gun fired at least once.

Although the German Dora howitzer with a caliber of 800 mm and weighing 1350 tons is the largest in size and weight, the Tsar Cannon in Moscow is listed in the Guinness Book of Records as the largest-caliber weapon.urrently it is an exhibit of the Museum of Artillery Guns of the 16th-19th centuries.
The Tsar Cannon is considered one of the main attractions of the Kremlin in Moscow.

Access : Coordinates: 55.751111, 37.618056 / Location : Ivanovskaya Square, Moscow Kremlin./ The best and fastest way is to take the metro. Tsar Cannon is located near the station. “Alexandrovsky Garden”.

opening hours : From May 15 to September 30 – from 9:30 am to 6:00 pm. From October 1 to May 14 – from 10:00 to 17:00.Working days are from Friday to Wednesday. Thursday is a day off.
Entrance fees: With a ticket to the Moscow Kremlin, To get to the Kremlin, you should buy a single ticket to visit the architectural ensemble of Cathedral Square. The ticket costs 700 rubles.

Go next : Moscow Kremlin – the sovereign crown of Russia / Walking through the old Kitay-Gorod district, you will see the church on Kulishki, the synagogue and the Lutheran cathedral./ Red Square : the most iconic square in Russia