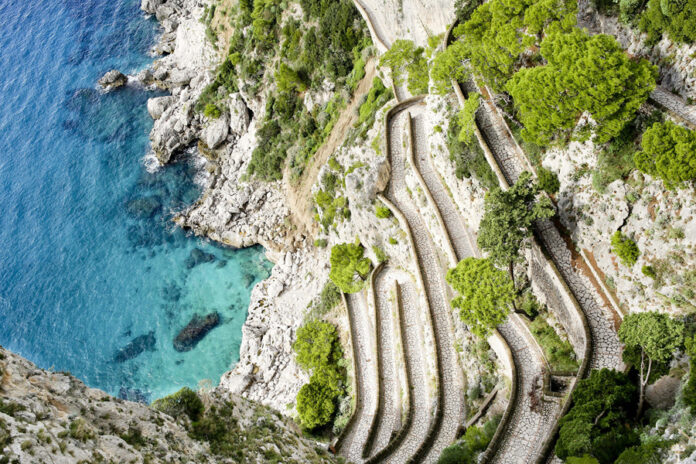 Via Krupp is a historical serpentine path on the south coast of the Italian island of Capri. The length of the road is 1350 meters. The road was built on the initiative of Alfred Krupp in 1901. Via Krupp you can reach Marina Piccola, the excellent, but also the most populous beach on the island of Capri.

From the observation deck of the gardens of Augustus, the road, which was built in 1900-1902, is partially visible. designed by an Italian engineer and funded by Krupp. The road led from the luxury hotel where Krupp lived, 100 meters down to the grotto.
The pedestrian link carved into the steep slope of Monte Castiglione is 1346.60 meters long, three meters wide and is now a tourist attraction.
Since 1976, the Via Krupp has been closed most of the time due to the danger of landslides.

Activities : sightseeing / photo opportunities / Long distance walking , admire the road from above over the higher gardens of Augustus. / cruise around the magnificent Faraglioni Rocks.

Go next : Anacapri , one of the two towns on the island of Capri / Blue Grotto – Grotta Azzurra / Faraglioni  / Piazza Umberto is the central square of Capri.