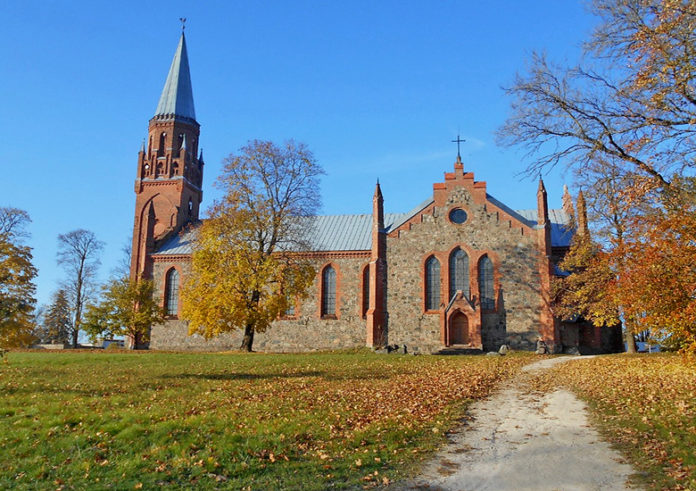 Viljandi  is an ancient hilly city in the South of Estonia. Evidence of civilization around Viljandi dates back to 500 B.C.. The first written record of a “Viljandi stronghold” was in 1154 in the commentaries to al-Idrisi’s world atlas “Geography.” Hanseatic merchants settled in Viljandi in the 14th century. For many people Viljandi conjures up images of the Viljandi Folk Music Festival and Viljandi Culture Academy. This small city is the “capital of folk music” for most Estonians and also appeals to people who enjoy parks. The city also has it’s own lake.

Access : Coordinates: 58.366667, 25.6 / By bus :  Viljandi has a regular bus connection from/to Tallinn, Tartu, Valga, Parnu and Poltsamaa (with a potential change at Kolga-Jaani), among others. The 1 Viljandi Bus Station can be found in the centre just north of the main junction.

Attractions : 1 Ruins of the Viljandi Order Castle (Viljandi Lossimagi), Tasuja puiestee (on the southern end of town). Built in 1224, it had turned into one of the most powerful fortresses of the Livonian Order by the end of the 14th century. The fortress got its final shape and size in the beginning of the 16th century and was one of the most distinguished fortresses in Estonia and Latvia. Due to various wars, all that are left from the entire order castle today are just a few stone walls, however they still give an impression of its former grandeur. From the ruins you have the most beautiful view over the lake of Viljandi.

2 Trepimagi (Stairs hill), Linnu tn 2. The stairs of the Trepimagi in Viljandi were constructed around the end of the 19th century and the beginning of the 20th century in order to improve the road connecting the town and the lake. Next to the Trepimagi lie the beautiful homes of the town’s merchants and rich residents from the old days.
3 Vaikemoisa manor, Vaikemoisa bussipeatus, Peetrimoisa kula, Saarepeedi vald. The Vaikemoisa manor was build in the beginning of the last century and is a good example of the Swiss chalet style influenced by the art nouveau movement. Today the manor house accommodates the Vaikemoisa young children’s orphanage and the house can be marvelled at from the outside only.
4 The Church of St. John (Jaani kirik), Pikk 6. A characteristic Estonian church, which dates back to the 17th century, but might appear 15th or even 14th century. The outside is not very interesting, but the interior is. A spacious hall with a flat wooden ceiling, more like a medieval castle. Also, there are several stained glass windows.
5 St. Paul’s Church (Pauluse kirik), Kiriku tn 3. Since 1866 a G. Knauf organ fills the church with music, the biggest still functional organ of its kind in Estonia.
6 Heimtali Museum of Domestic Life (Heimtali mois), Heimtali kula, Parsti vald. Museum is situated in an old village school building of Heimtali that is a beautiful rubble stone building from year 1864. Visitors can familiarize themselves with perfect collection of the examples of national handicraft like old household goods and the furnishings of a hundred year old schoolroom. There’s also a children’s playroom.
7 Viljandi Rope Bridge (Viljandi rippsild). The rope bridge has become a favourite for both residents of and visitors to Viljandi and one of the town’s most important symbols. It was built in 1879, when bridges of 50 meters in length of this style were not a routine yet. Initially, the bridge was in Tarvastu near Viljandi. In 1931, it was transferred to its final location. The dates are indicated on the bridge. It was reconstructed in 1995.
8 The Museum of Viljandi, Johan Laidoneri plats 10 . Tu-Sa 10-17:00. The building of the Museum of Viljandi is one of the oldest stone buildings in town. Until 1940 the house accommodated a pharmacy, the museum moved into this building in 1942. The permanent exhibitions of the museum provide an introduction into the local history from ancient times until today.
9 Town hall of Viljandi (Viljandi linnavalitsus), Linnu tn 2. The town hall building is one of the four oldest preserved stone buildings in town. The city government of Viljandi resides here.

Events
Viljandi hosts many events and several international festivals throughout the year, including:
Early Music Festival
Hanseatic Days
Young Dance Festival
Mulgi Rally
Winter Folk Dance Festival
“Theatre in Suitcase” puppet theatre festival
Since 1928, a run around Lake Viljandi has taken place on the first day of May every year.
Hanseatic merchants’ spirit can still be felt in Viljandi every June. People trade at a fair, dress the way people did in that era, organise exhibitions and party.
1 The Viljandi Folk festival. July. The festival runs for 4 days on the last weekend in July. More than 100 concerts take place in Viljandi castle’s ruins, churches, and other venues throughout Viljandi County. It is the largest annual music festival in Estonia. Each year the festival draws over 20,000 visitors.