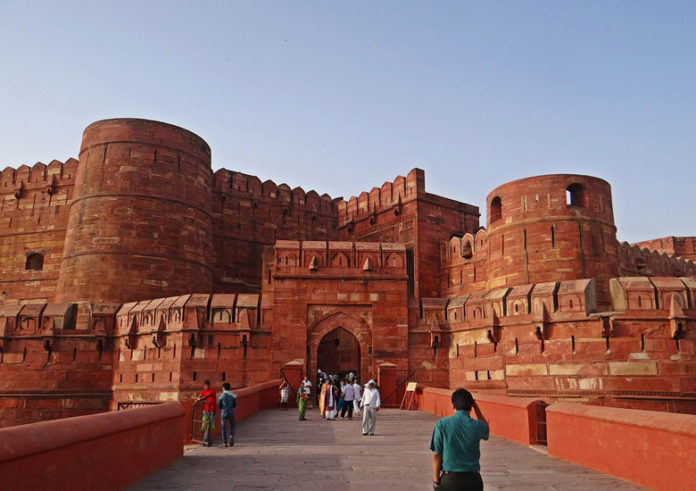 The fort of Agra, also called Lal Qila, strong Agra Red or simply as strong Red, although not to be confused with the Red Fort of Delhi. It is located on the west bank of the Yamuna River in the city of Agra, Uttar Pradesh State, India, 2.5 km northwest of the Taj Mahal. The fort, built in red sandstone (to which the name is due), by the Mughal emperor Akbar between 1565 and 1573, can be described much more accurately as a walled palace, which encloses an impressive collection of palaces and stately buildings with architectural styles that vary from the complexity of what was built by the Akbar to the simplicity of what was built by his grandson Shah Jahan and surrounded by a deep moat that was filled with water from the Yamuna river.

It is about 2.5 km northwest of its more famous sister monument, the Taj Mahal. The fort can be more accurately described as a walled city.The fort stretches for 380,000 square meter with a semi-circle layout.
Since 1983, it has been considered a World Heritage Site by Unesco.

Access : Coordinates:27.179542, 78.021101 / Location : Agra Fort, Rakabganj, Agra, Uttar Pradesh 282003, India / Agra is connected to major cities in the country and is situated on the Golden Triangle of the Tourist Circuit (Delhi-Agra-Jaipur). It is connected to Delhi and Varanasi By NH-2, to Jaipur by NH-11 and Gwalior By NH-3. The major road distances are : Bharatpur-57 km, Delhi-204 km ,
Gwaior- 119 km, Jaipur- 232 km, Kanpur- 296 km , Khajuraho-400 km ,Lucknow-369 km , Mathura- 56 km, Varanasi- 605 km.
By train : Agra is connected to all major cities of India. . There are about 20 trains to Delhi every day, and at least three or four to two Mumbai and Chennai. / By bike :
Bicycles are a very common means of transportation in India, especially for getting around cities. buy a bicycle in India and walk around. An average bicycle, that is to say, not a luxurious bicycle or a pile of ferries costs on average 4716.05 rupees. /
By bus :
Several buses connect Agra to Delhi. It takes around 4-5 hours to get to Agra by bus. Basically, there are three interstate bus stops:

Idgah Bus Stand is the main bus stop for traveling to Rajasthan / Madhya Pradesh, in the heart of the city, 8 km from the Taj.
ISBT in the Nagar Transport, 12 km from the Taj, is a state bus terminal among others. Most buses pass through here, except for buses coming from Idgah bus stop and going to Rajasthan.
Note: Do not take advantage of private luxury buses and travel agencies, as they are very expensive and leave you at your destination late. They will also tell you that the bus is direct to the destination, but in reality it is not.
/ By taxi :
You can book a taxi from the hotel or directly a book outside the train station. There is a stop for authorized government taxis. INR 950 / day for 8 hours. It is perhaps more expensive to book through the hotel since hotels have their rates. It is better to negotiate with the driver directly or through some online car rental portal book.

Cars are not allowed near the Taj complex, but the rest of Agra is easily discovered by car.

Tips : Tourists have to enter via Lahore Gate or Amar Singh Gate.

Nagina Masjid : a mosque which was built by Shah Jahan. The mosque was built using white marble only and was considered a private place of worship.

Bengali Mahal : This palace was built by Akbar .

Ghaznin Gate : The Ghaznin gate actually belongs to the tomb of Mahmud of Ghazni.

Diwan-I-Am : This hall was built by Shah Jahan.

Babur’s Baoli : a stone step well which took care of the water needs in the ancient fort of Agra.

Jahangir’s Hauz : a monolithic tank, and was built by Jahangir. The tank was initially used for bathing
Anguri Bagh  : 85 square, geometrically arranged gardens

Services : Tours and Travel Services / Audio guides in various languages are available near the ticket counter