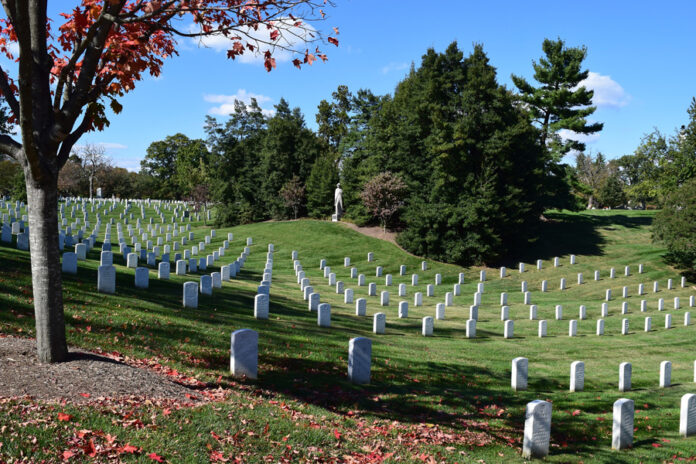 The Arlington National Cemetery  is one of the 139 national cemeteries in the United States. It is located in Arlington, Virginia,  southwest of the federal capital Washington, D.C. – United States.
The cemetery was established during the Civil War as a final resting place for Union soldiers on approximately 80-acre of Mary Custis Lee’s family’s Arlington estate.  The property expanded over the years to encompass more than 624 acres of cemeteries. .More than 400,000 people are buried on this 2.53 km2 site, veterans of all American wars, from the war of independence to the last conflicts of the twenty-first century, the war in Iraq or Afghanistan, passing through the Civil War, the two world wars, the Korean war and the Vietnam war.

Along with the Mill Springs National Cemetery, Arlington is the oldest military cemetery in the United States, Each year, more than three million people visit Arlington, attending funeral services and special ceremonies to honor veterans and historical figures.
commemorative trees are planted on the territory in honor of military units or naval ships, making Arlington Memorial Cemetery more like a park.The Cemetery, along with Arlington House, Memorial Drive, the Hemicycle, and Arlington Memorial Bridge, form the Arlington National Cemetery Historic District, listed on the National Register of Historic Places in April 2014.

Access : Coordinates: / The cemetery is located across the Potomac River from Washington, DC, at the west end of the Memorial Bridge in Arlington, Virginia.

Opening hours : The hours vary slightly depending on the season: April to September: 8 a.m. at 7 p.m. – October to March: 8 a.m. at 5 p.m.
The Cemetery Visitor Center is a good place to start your visit, where you will find maps, guides, exhibits, a bookstore, and restrooms.