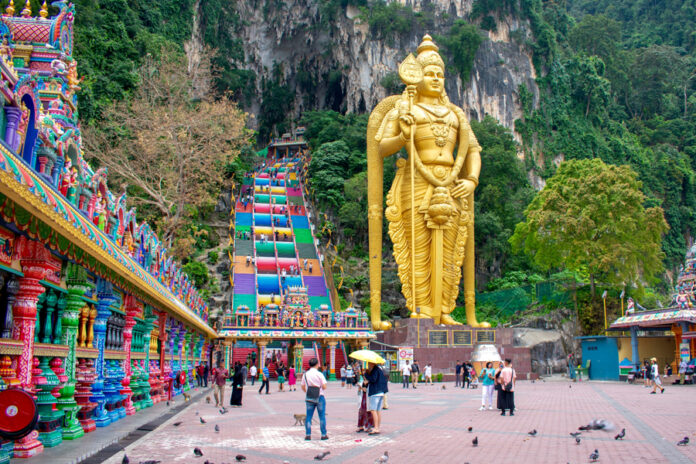 The Batu Caves are a group of caves, some of which have been converted into temples, in a limestone hill located 10 kilometers north of Kuala Lumpur in Gombak District, Selangor, in Malaysia.
In 1860, Chinese settlers began mining guano there to fertilize agricultural land. A little later, the complex, which includes three main caves and many small ones, was accidentally discovered in 1878 by the American naturalist William Hornaday.
Batu caves complex consists of three large caves and seven small ones. “Dark Cave” is the largest, its length is 2 km, height is 122 meters. Here you can admire stalactites and stalagmites. The Malaysian Nature Society organizes special educational trips to the “Dark Cave”. A staircase of 272 steps leads to the “Light” or “Temple” cave. Be careful – the stairs are full of arrogant monkeys. Another cave called Art Gallery contains many different murals and statues dedicated to Hindu mythology. The entrance to the “Gallery” is paid.

In front of the entrance to the complex of caves there is a statue of the god Murugan, 43 meters high. It took three years to build, about 24 million rupees, 1,550 cubic meters of concrete, 250 tons of steel beams and 300 liters of gold paint brought from Thailand.

The name comes from the Sungai Batu or the Batu River that flows nearby. There is also a village of the same name. In 1891, Hindu temples with statues of saints were built inside one of the caves, and since then this place has been very revered by the Hindus living in Malaysia. This cave complex is the most colorful thanks to the lighting and numerous sculptures. Plus, there is a shiva lingam and a small waterfall inside,Batu Caves are one of the most popular attractions in Malaysia.

The Batu Caves complex is open to the public every day from 7 am to 9 pm.

Note : There is a certain dress code. Women are only allowed into the temple with their shoulders covered. In addition, women and men must have their knees covered.
you can rent sarongs before climbing the stairs. Converted, these cost just under € 1

Activities : sightseeing / photo opportunities, Flash photography is not permitted due to the bats inside. / Rock climbing at Batu Caves.