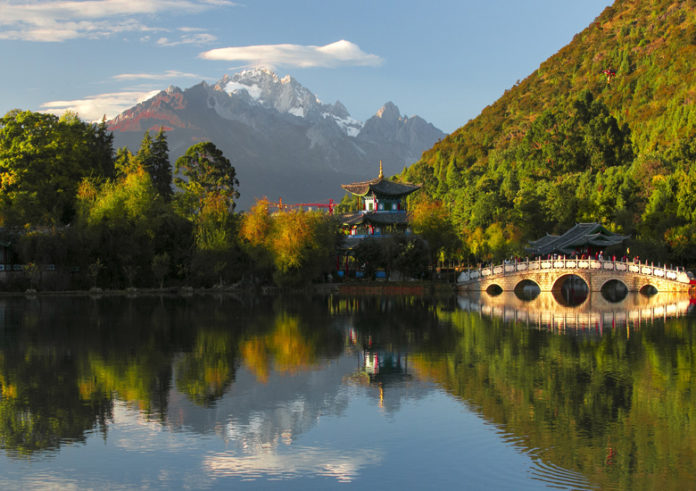 The Black Dragon Pond is a famous pond in the picturesque Jade Spring Park  also named Heilongtan Park (literally means Black Dragon Pool Park)  at the foot of the Elephant Hill, a short distance north of the  Lijiang Ancient Town, in Yunnan Province, China.  built in 1737 the Qing dynasty and gave a spectacular view  of the  the snow mountain.

Attractions :
– The Longshen Temple : was built in 1737 by the Naxi local people and is part of the park. Diose-y el nome de “Dragon God of Jade Spring” pol emperor Qianlong of the Qing dynasty mesi mesmu anu.
-The Moon-Embracing Pavilion  , originally built at the end of the Ming dynasty. The current structure and a reproduction of 1963 dempues d’un fueu in 1950.
– The threefold overlap Five-Phoenix Tower (Wufeng Tower), built during the Ming dynasty (1601) The tower, in fact, was found in the templo Fuguo, which is 30 kilometers west, but was moved to the jade spring park in 1979.