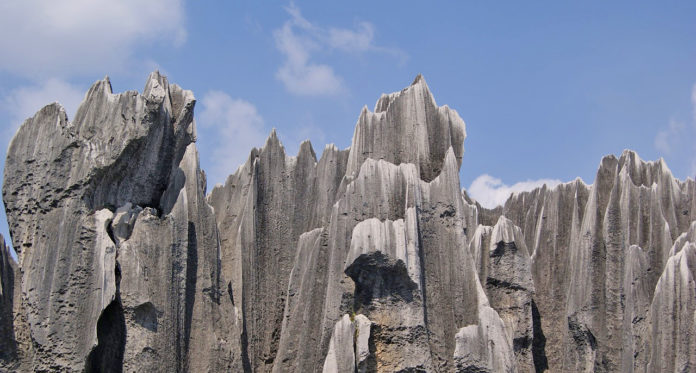 The Stone Forest or Shilin  is a notable set of limestone formations about 500 km2 located in Shilin Yi Autonomous County, Yunnan Province, People’s Republic of China, near Shilin approximately 90 km (56 mi) from the provincial capital Kunming. The tall rocks seem to arise from the ground in a manner somewhat reminiscent of stalagmites, or with many looking like petrified trees, thereby creating the illusion of a forest made of stone. Since 2007, two parts of the site, the Naigu Stone Forest  and Suogeyi Village , have been UNESCO World Heritage Sites as part of the South China Karst. The site is classified as a AAAAA-class tourist site.

Features : Shilin National Scenic Area  covers an area of 400 km2 (150 sq mi) and is divided into seven scenic areas as follows: Greater & Lesser Stone Forests  – also known as the Lizijing Stone Forest –  Naigu Stone Forest –  Zhiyun Cave – Lake Chang ( literally Long Lake) –  Lake Yue –  Dadieshui Waterfall – Qifeng Cave
These formations, caused by the erosion of limestone, are believed to be over 270 million years old and are a tourist attraction for both overseas and domestic tourists, with bus tours bringing tourists from Kunming. There are also a number of hotels in the area.

Geology : The Stone Forest area was a shallow sea some 270 million years ago. Extensive deposits of sandstone overlain by limestone accumulated in this basin during the Permian period of geologic time. Uplift of this region occurred subsequent to deposition. Later, exposure to wind and running water shaped these limestone pillars. These formations extend as far as the eye can see, looking like a vast forest of stone, hence the name “the Stone Forest”. The Major and Minor Stone Forests are developed in the nearly pure limestone of the Permian Makou Formation. The Naigu Stone Forest, 9 km northeast of the Major Stone Forest, is developed in dolomite and dolomitic limestone of the Permian Qixia Formation. Both formations are of Lower Permian age. They aggregate 505m in thickness and consist of shallow water (platform) massive limestone and dolomite, bio-clastic limestone, calcarenite and calcilutite. The Maokou Formation at Stone Forest appears to have been heavily altered diagenetically, and macroscopic fossil remains are seldom seen. Under the microscope, single whole or fractured fusulinid foraminifera are seen, commonly in biomicrite, biopelmicrite to biopelmicrosparite limestones. At least one zone of chert nodules occurs in the limestone. Unlike in the dolomitic Qixia Formation, dolomite in the Maokou Formation seldom ranges above 3%.

The strata are part of a gentle (2-6 degrees) westward dipping monocline. Conjugate shear joints (NE-SW and NE-SE) are well developed and these fractures provided the main passageways for surface water and underground water in the pre-kart development stage. The distribution, density and orientation of the fractures controlled the depth, size and orientation of the karst topography. Sandstones and shales of Liangshan Formation that lies below the carbonate rock formations serve as a permeability barrier and force the local groundwater to flow from west to east.