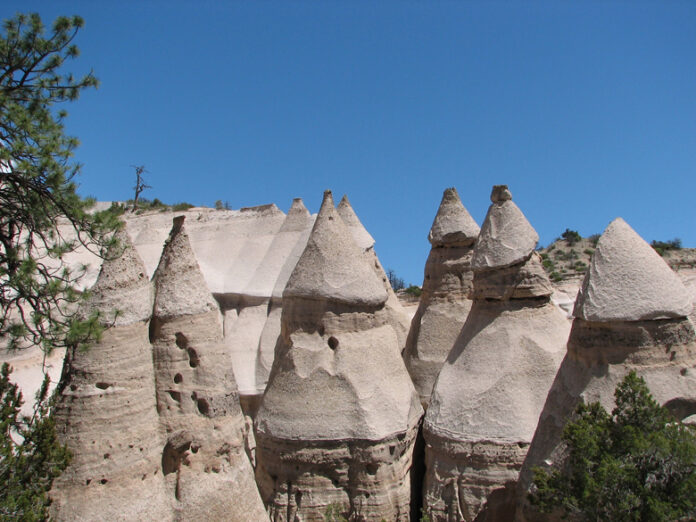 Kasha-Katuwe Tent Rocks National Monument is a small national monument-type nature reserve in the US state of New Mexico. It protects a desert valley with bizarre forms of erosion in volcanic rock.
The rocks were formed as a result of a volcanic explosion that occurred between 6 and 7 million years ago. Weathering and erosion have produced the particular conformation of canyons and earth pyramids.
The monument was designated a US National Monument by President Bill Clinton in 2001, shortly before his resignation. You can only get to the cliffs for a fee, since the monument has been transferred to the management of the pueblo community. In order to preserve the national treasure, the US Committee for the Protection of Nature has developed a special instruction for visiting the monument.
Access to the rocks is paid and is open only during the day. The monument is administered by the Governor of Cochiti, the Pueblo community.

Access : Coordinates: 35.660278, -106.408333 / Kasha-Katuwe Tent Rocks National Monument –  Location: Indian Service Rte 92, Cochiti Pueblo, NM / The access to the area is from Interstate Highway I 25 southwest of Santa Fe via a cul-de-sac through the area of ​​the Cochiti Indians, who reserve the right to block their reservation for all outsiders on the occasion of special celebrations. In this case it is not possible to visit the area.
/ From the parking lot, an approximately 2 km long paved circular path leads through the lower part of the valley.

Opening hours: 8: 00-17: 00. The entrance closes one hour before the park closes.one car and all its passengers – $ 5, group up to 25 people – $ 25 Free with America the Beautiful Pass  /  There are toilets, drinking water and picnic tables in front of the trail exits. Free parking is also available there. The trails themselves have no water or toilets. It is forbidden to visit the park with animals.

Go next : Town of Cochiti Lake, New Mexico / Santa Fe , one of the oldest cities in the entire United States.