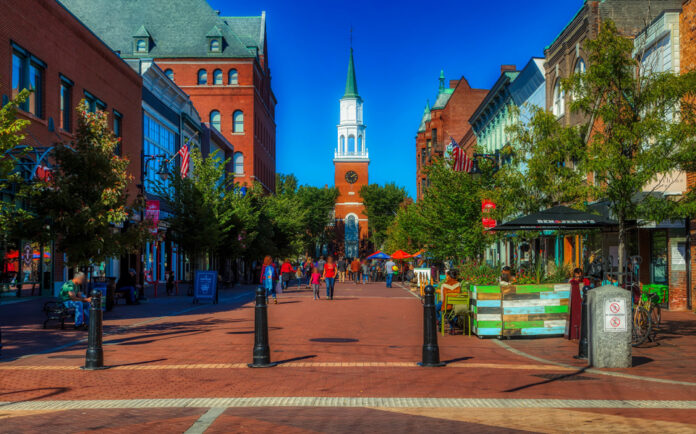 Burlington is the largest city in the U.S. state of Vermont, the center of Chittenden County.
Located on a hillside between the shores of Lake Champlain and the Green Mountains , The town center is on a hill overlooking Lake Champlain. The Winooski River flows along the northern city limits. The Lake Champlain Transportation Company has regular ferry services between Burlington and New York State in all seasons except winter.Burlington is part of an urban area comprising the contiguous towns of South Burlington, Winooski, Colchester, Essex and Williston as well as the village of Essex Junction.

Burlington is the largest city in the state of Vermont. It is located on Lake Champlain, in the heart of a small urban area that is essentially the center of all the fun in Vermont.
Burlington was named after the Burling family, who were the first to develop the surrounding lands. The settlement was founded in 1763, but its active settlement began only ten years later, when a shipyard and a sawmill started working here. There was a garrison in the city in case of an attack by the British. When the Anglo-American War of 1812-1814 broke out, the British fleet was bombarded from Burlington.

Burlington is the largest cultural center in Vermont. In 1791, the University of Vermont was founded here, in 1878 – Champlain College. The old university building (“Old Mill”) was laid by General Lafayette. 11 km south of the city, on an area of ​​18 hectares, the Shelburne Museum is spread, covering the life of American pioneers. Also, tourists are attracted by the house and grave of one of the leaders of the North American rebels, Etan Allen.

Burlington is a college town, home to the University of Vermont (“UVM”) and Champlain College. St. Michael’s College is located nearby (in Colchester).
The current downtown area is located on a hill overlooking Lake Champlain and is home to the University of Vermont. Former industrial prosperity has left behind much of the architecture of the Victorian era, including the buildings of architects Ammi B. Young, HH Richardson and McKim, Mead & White. Burlington became for a while a filming location to represent this era in the United States ,In addition to admiring the architecture in Burlington, you can usefully and enjoy the study of museums and exhibition centers.

Access : Coordinates: 44.475833, -73.211944 / Burlington is located in the east of Chittenden County, about 65 km northwest of Montpelier, 110 km north of Rutland and 150 km southeast of Montréal. / Burlington International Airport receives daily flights from Chicago and Orlando, as well as weekly flights from Baltimore, Cleveland, Detroit, New York, Philadelphia, Toronto and Washington. / By car :  From New York you can get here in 6 hours, from Boston in 3.5 hours, and from Montreal in 1.5 hours. Daily shuttle buses run to Burlington from New York, Boston, Saratoga Springs, and Amtrak trains from Washington via New York.

Events : The Mardi Gras Parade is held on Fat Friday in Church Street and features many live bands with special events ./ The Discovery Jazz Festival takes place in the first two weeks of June . / Vermont Brewery Festival in mid-July. In early August, Burlington hosts the Fools’ Street Show and the Boat Race Festival /  Air show takes place here at the end of the August.

Activities : sightseeing / photo opportunities / take a walk if you have time, is the campus of the University of Vermont / Take a cruise on the lake. /  visit to the Ben & Jerry ice cream factory / the Champlain Lake Chocolate Factory also accepts guided tours.