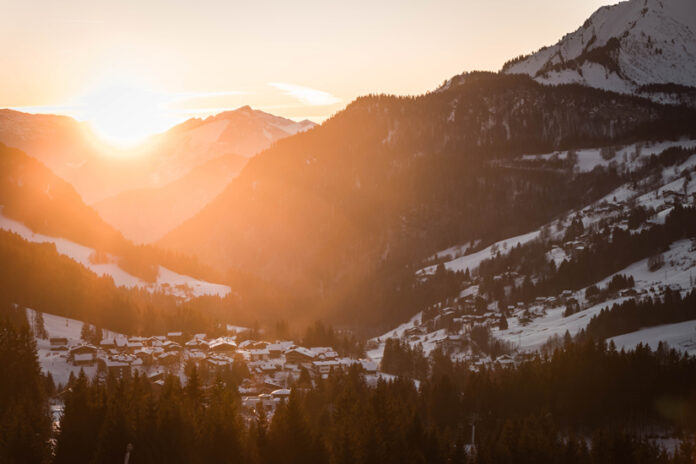 Les Gets is a ski resort in south-eastern France, in the Rhône-Alpes region and in the Haute-Savoie department, north of the French Alps. It is part of the Portes du Soleil ski area.

Les Gets is a mid-range and family ski resort, part of the famous Porte du Soleil ski area. its history dates from the 11th century and carefully preserves ancient traditions and historical appearance.
Located between Lake Geneva and Mont-Blanc, Les Gets has managed to preserve its soul of a typically Savoyard mountain village and its heritage filled with historical and cultural treasures. The diversity of its ski area is a delight for the whole family. Here we leave the village on skis to escape between fir trees and mountain pastures, to discover the 650 km of pistes of the Portes du Soleil.
Les Gets is located at 1163 m, near the tourist resort of Morzine, 28 kilometers south-southeast of the town of Thonon-les-Bains . The summer and winter sports resort extends to the top of the Col des Gets pass at the transition from Chablais to Faucigny, in the Savoy Alps at the eastern foot of Mont Chéry.
Together with the surrounding resorts (Morzine and Avoriaz) make up the largest ski area in Europe. Les Gets has hosted several Alpine Ski World Cup races. It has also hosted stages of the Mountain Bike World Cup.
Les Gets is one of the 48 towns classified as a “tourist town” in the department. The resort has obtained several labels: “Famille Plus Montagne” , “Charming village resorts”, “Large area resorts”,  “Charming village” and “Soft mountain” , as well. It is also one of the French resorts with the Top of the French Alps (TOTFA)  label.

Events : The resort hosts the Rock the Pistes Music Festival  in March./ In the summer, Les Gets hosts several downhill mountain biking events.