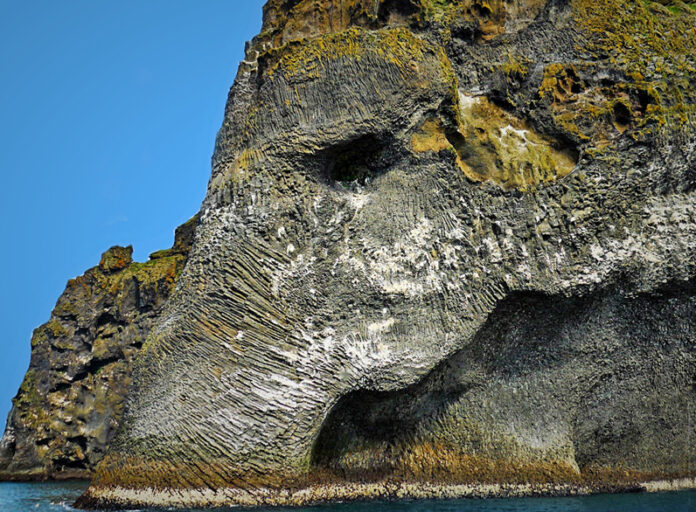 Elephant Rock is a natural rock formation in Heimaey island, part of the Westman Islands or Vestmannaeyjar,Iceland.

Heimaey  is an island in Iceland. It was formed as a result of the activity of the Vestmannaeyjar volcanic complex. This natural rock formation originated from the eruption of the Eldfell  volcano in 1973. The lava flows were cooled by sea waters, and the result was this miracle of nature – an elephant that lowered its trunk to quench its thirst. The height of the rock is more than 200 m.

The basalt surface, which really resembles a wrinkled elephant’s hide, enhances the impression of the realism of the “sculpture”. The elephant-shaped rock  attracts many visitors and contributes to the revitalization of the economic activity of the inhabitants of the Vestmannaeyjar archipelago.

Access : Coordinates:63.439284, -20.311016 / The Amazing elephant-shaped rock located south of Iceland is Heimaey Island / The Vestmannaeyjar can be reached to Vestmannaeyjar Airport by air from the domestic airport in Reykjavík or from Bakki, southeast of Hvolsvöllur. Since summer 2010 there is a ferry from the new port Landeyjahöfn near Hvolsvöllur.