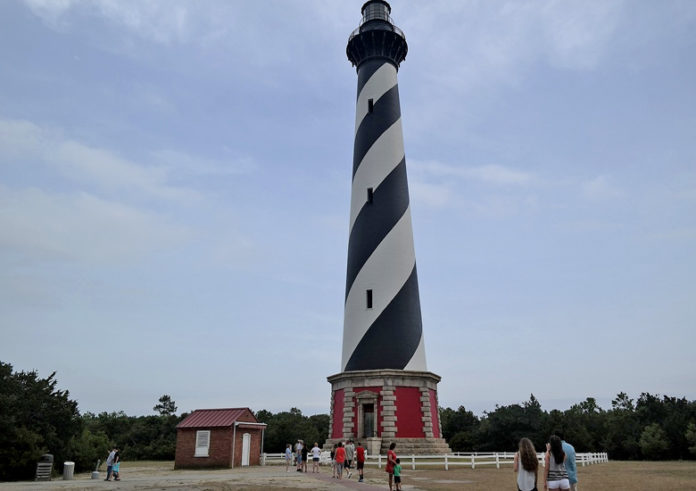 Cape Hatteras Light is a lighthouse located on Hatteras Island in the Outer Banks in the town of Buxton, North Carolina  ( U.S.A. ) and is part of the Cape Hatteras National Seashore.

The Outer Banks are a group of barrier islands on the North Carolina coast that separate the Atlantic Ocean from the coastal sounds and inlets. Atlantic currents in this area made for excellent travel for ships, except in the area of Diamond Shoals, just offshore at Cape Hatteras. Nearby, the warm Gulf Stream ocean current collides with the colder Labrador Current, creating ideal conditions for powerful ocean storms and sea swells.

The large number of ships that ran aground because of these shifting sandbars gave this area the nickname “Graveyard of the Atlantic.” It also led Congress to authorize the construction of the Cape Hatteras Light. Its 210-foot height makes it the tallest brick lighthouse structure in the United States and 2nd in the world. Since its base is almost at sea level, it is only the 15th highest light in the United States, the first 14 being built on higher ground.

History :  Original lighthouse :  On July 10, 1794, Congress appropriated $44,000 “for erecting a lighthouse on the head land of Cape Hatteras and a lighted beacon on Shell Castle Island, in the harbor of Ocracoke in the State of North Carolina.” The Cape Hatteras Lighthouse was constructed in 1802.

The Cape Hatteras light marked very dangerous shoals which extend from the cape for a distance of 10 nautical miles (19 km). The original tower was built of dark sandstone and retained its natural color. The original light consisted of 18 lamps  with 14-inch (360 mm) reflectors, and was 112 feet (34 m) above sea level. It was visible in clear weather for a distance of 18 miles (29 km).

“Hatteras light, the most important on our coast is, without doubt, the worst light in the world. Cape Hatteras is the point made by all vessels going to the south, and also coming from that direction; the current of the Gulf Stream runs so close to the outer point of the shoals that vessels double as close round the breakers as possible, to avoid its influence. The only guide they have is the light, to tell them when up with the shoals; but I have always had so little confidence in it, that I have been guided by the lead, without the use of which, in fact, no vessel should pass Hatteras. The first nine trips I made I never saw Hatteras light at all, though frequently passing in sight of the breakers, and when I did see it, I could not tell it from a steamer’s light, excepting that the steamer’s lights are much brighter. It has improved much latterly, but is still a wretched light. It is all important that Hatteras should be provided with a revolving light of great intensity, and that the light be raised 15 feet (4.6 m) higher than at present. Twenty-four steamship’s lights, of great brilliancy, pass this point in one month, nearly at the rate of one every night (they all pass at night) and it can be seen how easily a vessel may be deceived by taking a steamer’s light for a light on shore.”

The improvement in the light referred to had begun in 1845 when the reflectors were changed from 14 to 15-inch (380 mm). In 1848 the 18 lamps were changed to 15 lamps with 21-inch (530 mm) reflectors and the light had become visible in clear weather at a distance of 20 miles (32 km). In 1854 a first-order Fresnel lens with flashing white light was substituted for the old reflecting apparatus, and the tower was raised to 150 feet (46 m).

Second lighthouse :  At the behest of mariners and officers of the U.S. Navy, Congress appropriated $80,000 to the United States Lighthouse Board to construct a new beacon at Cape Hatteras in 1868. The Light-House Board was a federal agency under the direction of the Treasury Department but was headed by a multi-agency committee. The Board consisted of two Army Engineers, two Navy officers, two civilian scientists, and one additional officer from both the Army and Navy to serve as secretaries. Congress established the Board in 1852 for the purpose of creating a unified, continuous system of navigational aides along the coasts. Prior to 1852, lighthouse construction generally rested with local authorities, ultimately leading to a disjointed, ineffective national system. Under the Light-House Board, Navy officers determined where new lighthouses were needed Army Engineers selected exact locations, designed, and built them; and civilian scientists developed new technologies and techniques for displaying bright, consistent beacons.

Completed in just under two years under the direction of brevet Brigadier General J. H. Simpson of the U.S. Army Corps of Engineers, the new Cape Hatteras lighthouse cost $167,000. The new tower, from which the first-order light was first exhibited on December 16, 1871, was the tallest brick lighthouse tower in the world. It was 200 feet (61 m) above ground and the focal height of the light was 208 feet (63 m) above water. The old tower “being no longer of any use and in danger of falling during some heavy storm” was demolished in February 1872.

In the spring of 1879 the tower was struck by lightning. Cracks subsequently appeared in the masonry walls, which was remedied by placing a metal rod to connect the iron work of the tower with an iron disk sunk in the ground. In 1912 the candlepower of the light was increased from 27,000 to 80,000.

Ever since the completion of the new tower in 1870, there had begun a very gradual encroachment of the sea upon the beach. This did not become serious, however, until 1919, when the high water line had advanced to about 120 ft (36.5) from the base of the tower. Since that time the surf gnawed steadily toward the base of the tower until 1935, when the site was finally reached by the surf. Several attempts were made to arrest this erosion, but dikes and breakwaters had been of no avail. In 1935, therefore, the tower light was replaced by a beacon atop a four-legged steel skeleton tower, resembling a fire lookout tower, placed farther back from the sea on a sand dune 166 feet (51 m) above the sea, visible for 19 miles (31 km). The abandoned brick tower was then put in the custody of the National Park Service.

The Civilian Conservation Corps and Works Progress Administration erected a series of wooden revetments which checked the wash that was carrying away the beach. In 1942, when German U-Boats began attacking ships just offshore, the Coast Guard resumed its control over the brick tower and manned it as a lookout station until 1945. By then, due to accretion of sand on the beach, the brick tower was 500 to 900 feet (270 m) inland from the sea and again tenable as a site for the light, which was placed back in commission January 23, 1950.

The new light consisted of a 36-inch (0.91 m) aviation-type rotating beacon of 250,000 candlepower, visible 20 miles (32 km), and flashing white every 7.5 seconds. The steel skeleton tower, known as the Buxton Woods Tower, was retained by the Coast Guard in the event that the brick tower again became endangered by erosion requiring that the light again be moved.

The light displays a highly visible black and white diagonal daymark paint scheme. It shares similar markings with the St. Augustine Light. Another lighthouse, with helical markings—red and white ‘candy cane stripe’– is the White Shoal Light (Michigan), which is the only true ‘barber pole’ lighthouse in the United States. Its distinctive “barber pole” paint job is consistent with other North Carolina black-and-white lighthouses, “each with their own pattern to help sailors identify lighthouses during daylight hours.

Relocation :  In 1999, with the sea again encroaching, the Cape Hatteras lighthouse had to be moved from its original location at the edge of the ocean to safer ground. Due to erosion of the shore, the lighthouse was just 15 feet (4.6 m) from the water’s edge and was in imminent danger. The move was a total distance of 2,900 feet (880 m) to the southwest, placing the lighthouse 1,500 feet (460 m) from the current shoreline.

All other support buildings at the site were also moved at the same time. All support buildings were placed back in positions that maintained their original compass orientations and distance/height relationship to the lighthouse. International Chimney Corp. of Buffalo, New York was awarded the contract to move the lighthouse, assisted by, among other contractors, Expert House Movers. The move was controversial at the time with speculation that the structure would not survive the move, resulting in lawsuits that were later dismissed. Despite some opposition, work progressed and the move was completed on September 14, 1999.

The Cape Hatteras Light House Station Relocation Project became known as “The Move of the Millennium.” General contractor International Chimney and Expert House Movers won the 40th Annual Outstanding Civil Engineering Achievement Award from the American Society of Civil Engineers in 1999. The Cape Hatteras Lighthouse is one of the tallest masonry structures ever moved (200 feet tall and weighing 5,000 tons)

Access : Coordinates: 35.250533, -75.528817 / get to Hatteras Island by car, boat or small plane. The vast majority of visitors arrive by car from the north on N.C. Highway 12. Other car travelers arrive on the ferry from the southwest via Ocracoke Island. Some people arrive at Hatteras Island by boat from the mainland, the Intracoastal Waterway or the Atlantic Ocean. Marinas are available to boaters in Hatteras Village, at the southern end of the island by Hatteras Inlet. Flying to Hatteras Island is possible. Small planes can land at the National Park Service’s Billy Mitchell Airfield in Frisco.