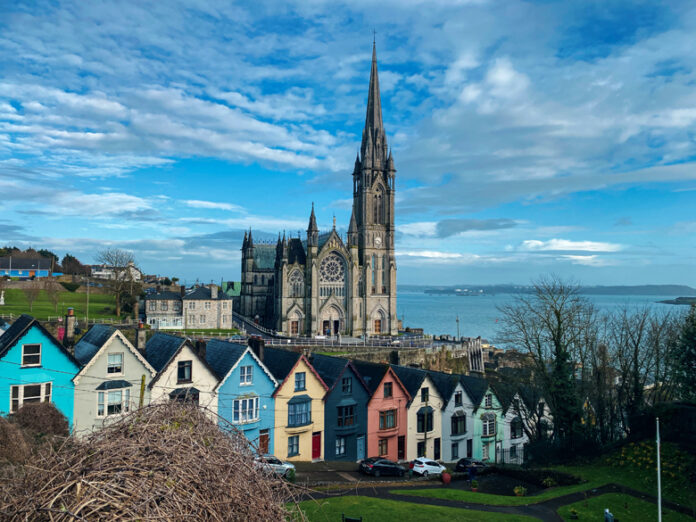 Cobh  is a picturesque port city in County Cork in the Great Island, ( Great Island is the fourth largest island in Ireland,Great Island is an island in the south of Ireland. It is located in County Cork near Cork City at the mouth of the River Lee in the Atlantic. ) south  of the Republic of Ireland.
The town was renamed Queenstown in 1849 after Queen Victoria of the United Kingdom visited, but took the old name again in 1922 when Ireland gained independence.
Cobh is located on the southern shore of the “Great Island” at one of the world’s largest natural harbors, Cork Harbor, and is connected to the mainland by ferries (Passage West) and a bridge.

Cobh is now a getaway for visitors from Cork City and for the passengers of many cruise ships that moor in port. The picturesque port city is characterized by its hillside location – combined with some very steep streets – and numerous brightly painted houses.

Access : Coordinates: 51.851, -8.2967 / Cobh is on an island there are only two access routes : From Cork on the N8 / N25 via Cobh Cross to Cobh, approx. 22 km
From Limerick on the N20, approx. 120 km / Outside of the Dublin metropolitan area, Cobh is one of the few towns in Ireland served by a suburban train. The town is one of two terminals for Cork Commuter Services.
/ The nearest airport is Cork Airport, which can be reached in 20-30 minutes from Cobh via the R624 road and the N25 road. / By boat : The Cork Harbor is one of the largest European natural harbors. It covers the mouth of the River Lee, in which the Great Island with the city of Cobh lies, and is the destination of several cruise ships. The 1 Cruise Terminal is located in the immediate vicinity of the city center. The 2 Ringaskiddy Ferry Terminal or Cork Ferry Terminal is the start / end point for ferries from Roscoff. It can be reached from Cork via the N28.

Go next : Spike Island. A boat goes to Spike Island at the weekend. Worth seeing: Fort Mitchel / Kinsale 50 km west is a charming historic small port in County Cork, Southwest Ireland. / Blarney with its famous castle ,a village in County Cork , is only 6 km northwest of Cork city./ From Cove Station, it takes 15 minutes to reach Cork, the second largest city in Ireland.