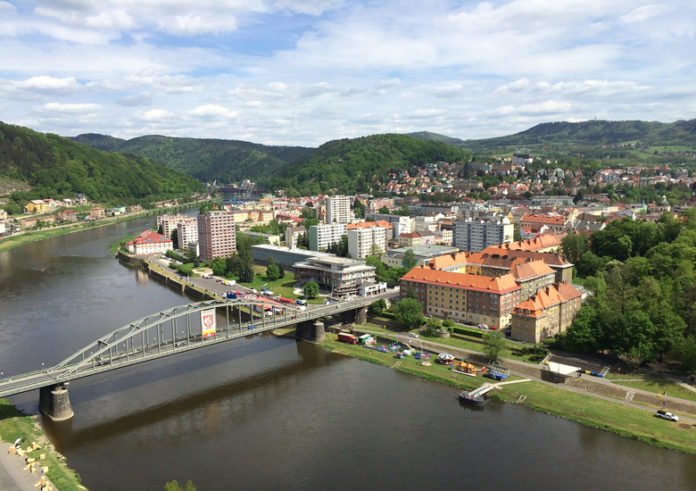 The town of Decin is situated in a wide basin on the banks of the river Elbe. It is the natural center of the Bohemian Switzerland region and the Tisa region. There is a significant river port, a railway line knot and several important road routes cross here. Decin is an ideal place for exploring and exploring the beautiful surroundings.  Decin was founded in the 10th century as a settlement near the Premyslid fortified settlement.

From the 13th century it was one of the royal cities and was the crossroads of trade routes on the Elbe. In the 19th century the city experienced another boom thanks to the construction of the railway to Dresden. One of the most famous natives of the town is Miroslav Tyrs, a patriot and co-founder of Sokol, whose name is also one of the local bridges. Bridges have always played a big role in the life of the city and you will find their largest number in northern Bohemia. The oldest is the stone bridge over Ploucnice in the Old Town, which was built in the 17th century.

Decin today :  Today Decin consists of 35 city districts. Its dominant feature is Pastyrska stena with a lookout restaurant of the same name and a Baroque-Classicist chateau towering on a rocky promontory above the confluence of the Labe and Ploucnice Rivers. This beautiful city is a popular starting point for hiking and exploring the landscapes of the Czech-Saxon Switzerland.

By train :   Decin main station (Decin hlavni nadrazi). Decin is on the main railway corridor connecting Prague with Germany. From Prague It takes 1hr 30min. by train to get there. From Dresden you can take the direct Eurocity which takes 46 minutes for the very picturesque ride through the Elbe valley and Saxon Switzerland.
2 Decin vychod. The other railway station .Get around : Decin is served by 17 bus lines. It is also possible and reasonable to use train, there is 15 train station within whole Decin.

Activities : Via Ferrata , From the Decin embankment, the climbing wall of the Fia Ferrata, called the Road to the Nigga, heads up pastyrska stena. It has two boarding options heading to the main terrace, from which there are several directions of different difficulty. Both beginners and experienced climbers come to their place. The necessary equipment rental is located near the ferrata./ Water park :  The Decin Aquapark and the swimming pool with thermal water allow swimming even in colder weather./ Boat trips on Elbe :(through Elbe Sandstones protected landscape area) to Hrensko (last town on Elbe in the Czech Republic) and Bad Schandau / Hiking . Decin is a great starting point for hiking in Central Bohemian Uplands, Elbe Sandstone Mountains and Bohemian Switzerland National Park. Hiking trails are well marked

Cycling : Route Decin – Hrensko , description : From Decin you will join the cycling trail “Elbe Trail – The Sandstone Rocks” and follow the picturesque and undemanding section around the Elbe to Horni Zleb, Certova Voda, Dolni Zleb and Schona / Hrensko, where you can board a ferry (for a fee of CZK 40 for person and bike CZK 30), which will take you to the other bank of the Elbe.
Golf courses , Fishing : Stara Oleska is located between Decin and Ceska Kamenice. Next to the village there are two ponds – Olessky rybnik and Mala Oleska, where fishing is allowed on a fishing license./ Riding / Swimming pool spa / Skiing , Ski resorts re available