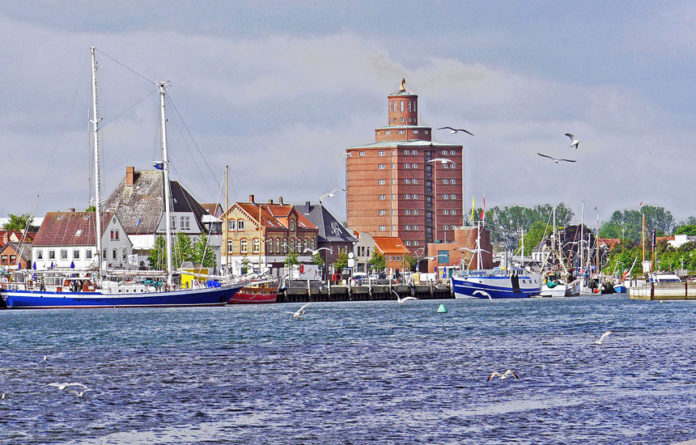 Eckernforde  is a German town in Schleswig-Holstein, Kreis Rendsburg-Eckernforde, on the coast of the Baltic Sea approximately 30 km northwest of Kiel. The population is about 23,000. Eckernforde is a popular tourist destination in northern Germany.

Name :  The name of Eckernforde is of mixed origin, but derived from the name of a Danish castle formerly located near the current town, which is also reflected in the name of the town district of Borby. This fortification is listed in the 13th century Liber Census Ykærnæburgh. In 1441, the town used an official seal listing its name as Eherneborgh. The first syllable corresponds to the modern Danish word “egern” meaning squirrel while “-forde” is Low German meaning fjord. The -forde ending is documented in Latinized form on two official seals used by the town in the 1602 and 1624. The etymology of the town’s name is reflected in the presence of a squirrel in the town’s coat of arms, a feature first documented by the 1441 seal.

History  :  In 1197 Eckernforde was mentioned for the first time.
Eckernforde was mentioned in the year 1302 for the first time free of doubts as a city, but in 1288 the inhabitants were already called oppidani (city citizen).
During the First War of Schleswig two Danish ships, the Christian VIII and the frigate Gefion tried to land in Eckernforde in April 1849. They were cannonaded from the shore. The Christian VIII exploded, while the Gefion surrendered and was captured. Theodor Preusse, the commander in chief of the southern troops, died while rescuing Danish troops from the Christian VIII.
The 13 November 1872 Baltic Sea flood hit the coast of the Baltic Sea from Denmark to Pomerania. Of all the German coastal settlements, Eckernforde was most heavily damaged due to its location on Eckernforde Bay which was wide open to the north-east. The entire town was flooded, 78 houses were destroyed, 138 damaged and 112 families became homeless.
The Count Saint-Germain was buried in Eckernforde near the St. Nicolai Church. His grave was destroyed by the 1872 storm surge.
In 1934 the seaside resort Borby was incorporated.
After the Second World War a United Nations displaced persons camp for Estonians was located near Eckernforde, where a section of the Hohenstein mansion was converted into a maternity ward.

Access : Coordinates: 54.474167, 9.837778 / The Kiel–Flensburg railway runs through the town with trains stopping at Eckernforde station, situated to the west of the town centre. The town’s main bus station, central omnibus station (German: ZOB), is directly connected to the train station. The operating company of the railway network is Deutsche Bahn. Eckernforde has 4 bus routes for urban connections operated by single-deck buses. Eckernforde has no trams or trolley-buses. For transportation, the statewide Schleswig-Holstein-fare applies. At the bus station is also a taxi stand located. In Eckernforde are two bike rental outlets, one is located near the beach and one is in the pedestrian area.Next international Airport is Hamburg Airport.