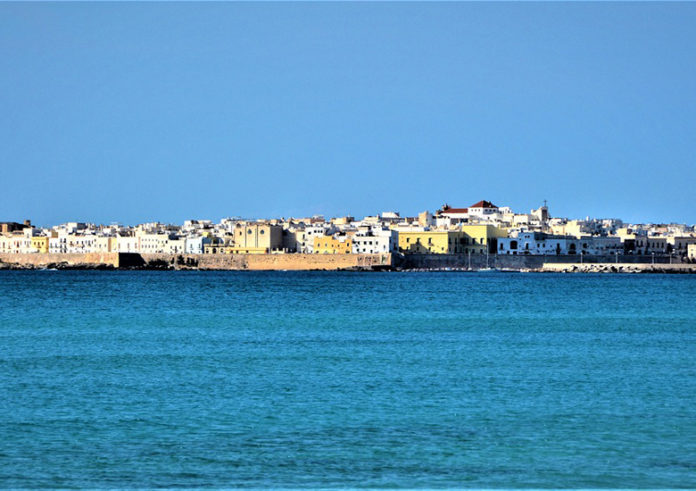 Gallipoli (Greek: Kallipolis (Καλλίπολις), meaning “Beautiful City”) is a southern Italian town and comune in the province of Lecce,

in Apulia. In 2014, it had a population of 31,862 History : According to a legend, the city was founded in ancient times by Idomeneus of Crete. Pliny the Elder attributes the foundation to the Senones Gauls, while more likely it was a Messapic settlement. Historically, what is known is that Gallipoli was a city of the Greater Greece, ruling over a large territory including today’s Porto Cesareo. In 265 BC it sided with Pyrrhus and Taranto against ancient Rome, suffering a defeat which relegated it to a Roman colony (later a municipium).

In the early Middle Ages, it was most likely sacked by the Vandals and the Goths. Rebuilt by the Byzantines, Gallipoli lived an economically and socially flourishing period due to its geographical position. Later it was owned by the Roman Popes, and was a centre of fighting against the Greek monastic orders.

In the 11th century Gallipoli was conquered by the Normans and, in 1268, it was besieged by Charles I of Anjou, causing numerous inhabitants to flee to the nearby Alezio. The city was repopulated around 1300, under the feudal rule of the principality of Taranto. In 1484 the Venetians tried to occupy it, but without results. King Ferdinand I of the Two Sicilies started the construction of the port, which in the 18th century became the largest olive oil market in the Mediterranean. After the unification of Italy (1861), Gallipoli was capital of a circondario, together with Lecce and Taranto.

By train : Gallipoli railway station, Via XX Settembre. It is the main station of the town and is served by the trains of Ferrovie del Sud Est (FSE), a local railway company that provides a link to Lecce in about 90 minutes. The station was open in 1885 and is located in the modern centre close to Corso Roma, few minutes by foot from the bridge that leads to the old town By bus : Various private bus companies provides links from cities of Italy, France, Germany and Switzerland to Gallipoli:

Flixbus from 32 destinations in Italy and Europe, like Hannover, Munich, Nuremberg, Pescara, Pompeii, Rimini, Rome, Siena.
Marino Bus from Florence, Frankfurt, Lyon, Milan, Naples, Pisa, Stuttgart, Zurich and many other localities.
Marozzi from Avellino, Bari, Benevento, Rome.
Miccolis from Caserta, Matera, Metaponto, Naples, Pompeii, Potenza, Salerno.
Ouibus from Aix-en-Provence, Marseille, Milan, Nice.
Fares can drastically change according to the period and even the day chosen. Info are available on their websites. All coaches stop at the bus station of 3 Piazzale Cimitero, in front of the municipal cemetery.

By car : From Brindisi: take SS 16  to bypass the city, merge onto Strada Statale 613  towards Lecce, here take Tangenziale Ovest and SS 101  to Gallipoli. (1 hr)
From Bari: Bari Nord motorway exit, then take SS 16  until Fasano and SS 379  to reach Brindisi, then follow the route above. (2 hr)
From Taranto: the easiest way is reaching Brindisi heading down SS 7  and following the route above (1½ hr). Another possibility is driving along the Ionian coast crossing some towns, but it usually requires more time.
From Santa Maria di Leuca: drive along SS 274  for 30 minutes.

Activities : Festa di Santa Cristina (Festival of Saint Christina): the most important religious festival in the town, in honor of the town’s patron saint. The event takes place on 23, 24 and 25 July, when the statue of Saint Christina is procession over the sea and Corso Roma is decorated with spectacular and colored illuminations, in addiction to many stalls. This is a really can’t-miss events if you choose to visit Gallipoli during this period.
1 Acquapark Splash!, Litoranea Santa Maria al Bagno (Rivabella locality) +39 0833 273400, e-mail: info@splashparco.it. 10:00-18:30. A large water park with giant slides and many other attractions, 2 km north of the city centre. €12.
Theatres
2 Teatro Garibaldi (Teatro comunale “Giuseppe Garibaldi”), Via Giuseppe Garibaldi, 8 (the alley in front of the Cathedral’s bell tower). The most ancient theatre of Apulia, built in 1825 as Teatro del Giglio, in honor to the House of Bourbon. It is the most elegant one of the city and it’s focused on theatrical exhibitions, conferences with actors and musicians and cinema projections of cultural interest.
3 Cinema Teatro Italia, Corso Roma, 207 (at the foot of the “skyscraper”). Built in 1976 with a capacity of 1550 viewers. It is mainly used as a cinema, but sometimes it hosts theatrical performances.
4 Cinema Teatro Schipa, Corso Roma, 170. 500-seat hall built in 1900 and dedicated to Tito Schipa, one of the greatest leggero tenors of all times. It is mainly focused on cinema projections