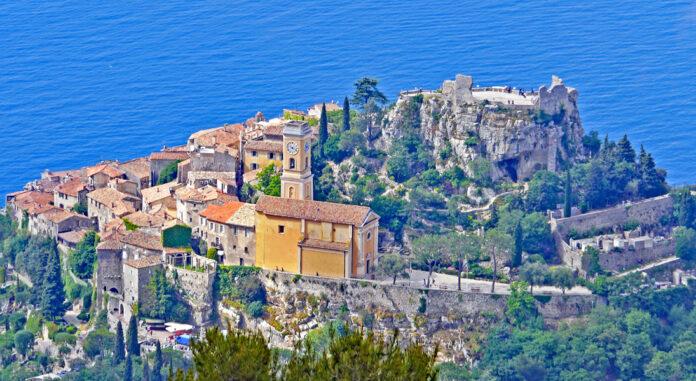 Èze  is a picturesque town on the French Riviera, located in the the Alpes-Maritimes department, and in the Provence-Alpes-Côte d’Azur region.France.

The city got its name thanks to the temple of the goddess Isis built here. At the very beginning of its existence, it was a small village, which grew to the scale of an entire urban settlement. The ruins of an ancient castle of the 12th century, which served as a fortress, have survived to this day.

This village is also famous for the fact that Nietzsche lived here for 18 years, here he wrote the famous book “As Zarathustra Spoke” and here he walked along steep mountain paths, going down to the sea.
The village of Eze lies behind a mountain called Tête de Chien (“Dog’s Head”), heading west from Monaco and known as one of the most magnificent places in France. Due to the significant difference in elevation – about 400 m – the village is divided into two regions – upper and lower. Upper region.

The village of Eze is often referred to as an intermediate point between Nice and Monaco, but in fact it is located closer to Monaco.
Located between the sea and the mountains, the village of Eze has retained its medieval charm and atmosphere ,Dominated by the ruins of the 12th century castle. The winding streets and the baroque church are worth a detour ,Its many shops, art galleries, hotels and restaurants attract large numbers of tourists and honeymooners. As a result, Èze was referred to by some as a “village-musée” (“museum village”) In addition to beaches and unforgettable panoramic views, Eze attracts also tourists with numerous art workshops and craftsmen’s houses.

Events : At the end of July, they celebrate the “Holiday of Bygone Times”. Residents dress up in medieval costumes and offer their guests food according to real old recipes.

Activities : sightseeing / photo opportunities / “Nietzsche’s Trail” Walking along it, the philosopher wrote his work “Thus Spoke Zarathustra.” / Make your own perfume at the Galimard or Fragonard perfumeries.

Go next : The village and Le Grande Carniche / The city-state of Monaco is just 5 kilometres East. / Nice, the main city of the département, is about 7 km West. / La Turbie, another small village located East on the Grande corniche road.