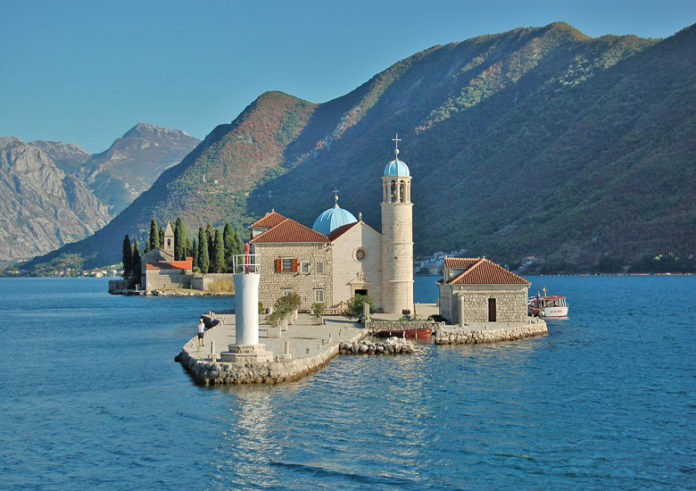 Perast is a small town belonging to the municipality of Kotor in Montenegro. It lies below the St. Elias mountain (873 m) on the shore of the Bay of Kotor and is the place with the mildest climate and the most hours of sunshine in the year. Perast is connected to Risan in the north and Kotor in the southeast via the shore of the bay. In front of Perast there are two picturesque islands: St. George (Sveti Dorde) and St. Mary’s on the rock (Gospa od Skrpjela). On one island is the cemetery of the place, the other is a well-known pilgrimage site with its chapel.

The old Perast had no city wall, but was protected by nine individual towers. These were built in the 15th and 16th centuries for protection against the Ottomans, after the place had come back in 1420 under the rule of the Venetians. After the end of the Turkish wars Perast had its heyday in the 18th century. In the village there were four shipping companies, which together maintained a fleet of more than 100 merchant ships. Many of the prosperous captains chose Perastas as their retirement home and built smaller or larger villas that still shape today’s cityscape. By the end of the 18th century, Perast had more than 1,600 inhabitants. When the Venetian rule ended in 1797 with the destruction of the republic, this was greatly regretted by the inhabitants, because they had always maintained a good relationship with the Republic of St. Mark.

Access : Coordinates: 42.486944, 18.699167 / By air : Nearby Airports : Tivat (19km, 25min) , Dubrovnik (59km, 1h 12min) , Podgorica (102km, 2h 3min)
By bus : regular bus line (blue line ) which goes from Kotor to Kostanjica and back.  runs every hour but there are lots of other buses which are going to/from Budva, Bar, Podgorica etc through Perast and Kotor. By car : You can get to Perast by following the Bok Kotorska Bay coast line.(from Kotor 15 min drive) / By boat :  Several boat trips from Kotor and Budva takes you through the bay and sets you off at the small island church of Our Lady of the Rock.