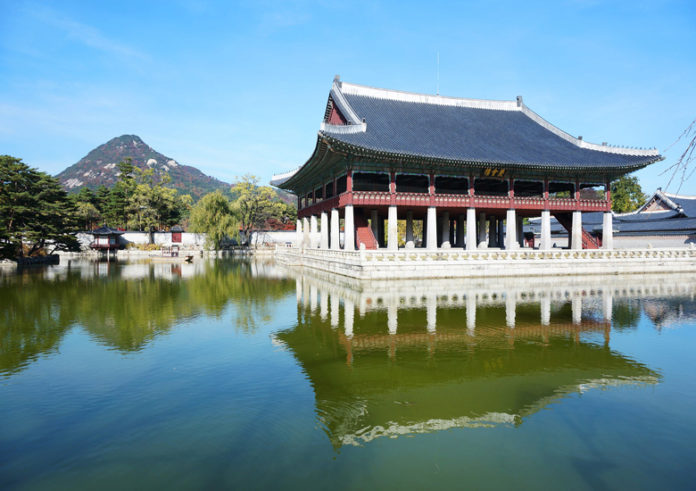 Gyeongbokgung is a palace complex  in Seoul. .  is the first and the  largest palace of Five Grand Palaces, which were built in Korea of the Joseon dynasty. it is located in northern Seoul, South Korea , Gyeongbokgung was completed in 1395, three years after the founding of the Joseon Dynasty. Upon completion, the capital of the Gaegyeong dynasty was relocated to Hanyang and served as the king’s residence until its destruction in the Imjin War of 1592. It was only in 1868 that he was rebuilt by King Gojong in the fifth year of rule.
During the Japanese reign (1910-1945) buildings were demolished and the construction changed significantly. 1990 began to reconstruct the palace in its original form . The largest of the five palaces, built during the time of Choson, had 7,700 rooms, housed in 500 buildings on an area of about 40 hectares.

Today, the palace houses the buildings that served the government of the state, the gates and chambers of the royal family , and houses also the National Palace Museum and the National Folklore Museum on its territory. The  complex  declared Historic Site No.117 (Designated on January 21, 1963).In a poll of nearly 2,000 foreign visitors stated that watching the changing of the guards at the main gate Gwanghwamun is their third favorite activity in Seoul.

Attractions- Site Layout :
– Main Gates of Gyeongbokgung : Gwanghwamun (The Main and South  Gate),Heungnyemun (The Second Inner Gate),Geunjeongmun (The Third Inner  Gate),Sinmumun (The North Gate),Geonchunmun (The East Gate),Yeongchumun (The West Gate)
– Oejeon (Outer Court) : Geunjeongmun (The Third Inner Gate),Geunjeongjeon (The Throne Hall),Sajeongjeon (The Executive Office),Sujeongjeon,Cheonchujeon,Manchunjeon
– Naejeon (Inner Court) : Gangnyeongjeon (The King’s Quarters),Gyotaejeon (The Queen’s Quarters),Jagyeongjeon (The Late Queen’s Quarters
– Donggung (Palace of the Crown Prince): Jaseondang (The Crown Prince’s and Princesses’ Quarters),Bihyeongak (The Study of the Crown Prince) – Pavilions : Gyeonghoeru (The Royal Banquet Hall),Hyangwonjeong /
– Bridges : Yeongjegyo , Chwihyanggyo / – Bihyeongak : Bihyeongak /
– Buildings : Gangnyeongjeon : a building used as the king’s main residing quarters / Geunjeongjeon : known as Geunjeongjeon Hall, is the throne hall where the king formally granted audiences to his officials.
– Gwanghwamun : is the main gate of Gyeongbokgung Palace. / – Gyeonghoeru : known as Gyeonghoeru Pavilion, is a hall used to hold important and special state banquets during the Joseon Dynasty.
– Gyotaejeon : is a building used as the main residing quarters by the queen during the Joseon Dynasty.
– Hyangwonjeong : Hyangwonjeong , or Hyangwonjeong Pavilion, is a , two-story hexagonal pavilion built around 1873 by the order of King Gojong when Geoncheonggung residence was built to the north within Gyeongbokgung.
– Jagyeongjeon : is a building used as the main residing quarters by Queen Sinjeong , the mother of King Heonjong
– Jibokjae : is a two-storey private library used by King Gojong. / – Sajeongjeon : is a building used as the main executive office by the king during the Joseon Dynasty
– Taewonjeon : Taewonjeon is an ancestral shrine originally built in 1868 to house a portrait of King Taejo, the founder of the Joseon dynasty.
– Donggung : Donggung is the lecture hall, where the prince received the preparatory education in order to become a future monarch),
– Geoncheonggung : Geoncheonggung was a private royal residence built by King Gojong within the palace grounds in 1873.
– Governor-General’s Residence : The back garden of Gyeongbokgung used to contain the main part of the Japanese Governor-General’s residence,
– the Gyeongbokgung Palace houses the National Folk Museum of Korea, the National Palace Museum of Korea, and traditional Korean gardens.

Interpretation Services Offered : Tours depart from in front of the information center at Heungnyemun Gate / From October, Gyeongbokgung starts its night season, from 7PM to 10PM.