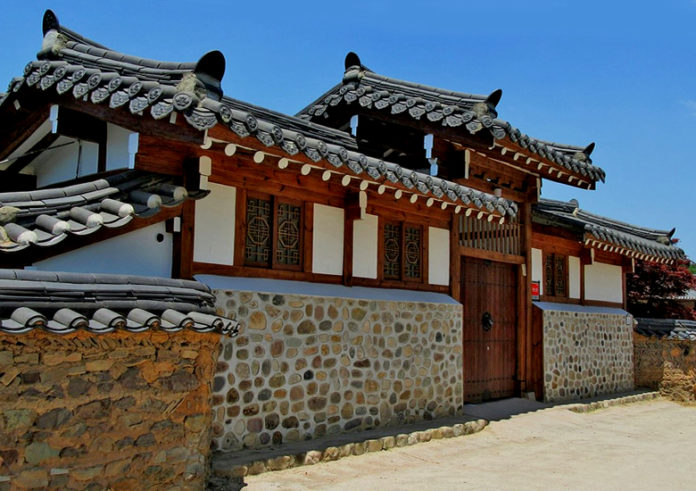 Hahoe is a historic village in Gyeongsangbuk-do Province on the south coast of South Korea.The name Hahoe “Village Enveloped by Water”. The village was founded at the end of the Goryeo period  (918-1392) in the 13th century by Ryu Jong-hye  at the Nakdonggang.  During the Joseon era, many famous politicians and scholars came from the village and from the 16th century the village was known as the origin of the aristocratic clan, which had great influence in the southeastern region of the country
The village  sits on the banks of the Hwachon River, a tributary of the Nakdong. It is organized according to pungsu geomantic principles and therefore has the shape of a lotus flower.

Traditional arts and games are held here, including Hahoe Byeolsin-gut Talnori and Seonyujul Bulnori. Hahoe Byeolsin-gut Talnori is a mask ballet dating from the Goryeo Dynasty (918-1392) which is a cultural heritage.
Unesco declared it, together with Yangdong, a World Heritage Site in 2010.-UNESCO World Heritage / Important Folklore Materials No.122

Attractions :
– folk Village, a UNESCO World Heritage Site, a very nice traditional village to walk around and know how life was lived and lived in many of the 600 year old houses. Some of them rent “hanok” rooms.
– museum of masks , At the entrance of the village there is an interesting museum of masks displaying Korean and international masks./ the impressive Byeongsanseowon Confucian Academy , just follow the forest trail behind the church to get there.
– The impressive Buyongdae Cliff ,