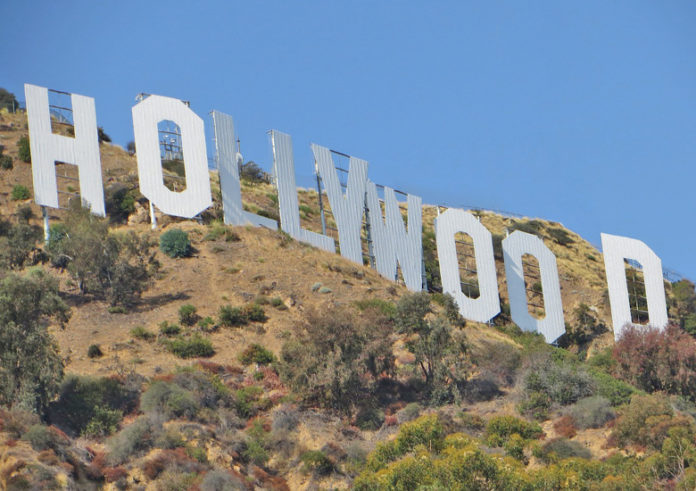 Hollywood Sign is the name given to the famous giant sign – an American landmark and cultural icon overlooking Hollywood . It is situated on Mount Lee, in the Hollywood Hills area of the Santa Monica Mountains, California / The Hollywood Hollywood Sign has become a Los Angeles icon and synonymous with the city, a district of Los Angeles. The letters of the lettering are about 14 meters high and together 137 meters long. The entire stracture weighs around 220 tons.

On July 13, 1923, a brokerage company for $ 21,000 hired the logo HOLLYWOODLAND on urban grounds in the Hollywood Hills to promote the purchase of land in this then barren and remote area north of the then much smaller Los Angeles. Numerous white metal plates of about 0.9 x 2.7 m were nailed to a framework of old telephone poles, pipes, wires and various wooden parts. The letters were illuminated with a total of about 4000 bulbs. Mounted on Mount Lee lettering was actually planned only as a provisional for a period of one and a half years, but remained intact and quickly became a symbol of the emerging film location Hollywood.The new letters were 45 feet (13.7 m) tall and ranged from 31 to 39 feet (9.4 to 11.9 m) wide

Hollywoodland : Installed in 1923, the sign originally spelled out “Hollywoodland”—it was a massive advertisement for a new housing development below.
In 1949, the Hollywood Chamber of Commerce signed a contract with the Parks and Gardens Department of Los Angeles to repair and rebuild the poster. The contract stipulated that the suffix “LAND” be removed to put “Hollywood” and thus represent the entire district, not just the “Hollywoodland” housing development.
In 1978, in large part because of the public campaign to restore the landmark by Hugh Hefner, founder of Playboy magazine,the Chamber set out to replace the severely deteriorated sign with a more permanent structure,Nine donors gave  US$249,999.93 , to sponsor replacement letters . The new letters made of steel supported by steel columns on a concrete foundation were 45 feet (13.7 m) tall and ranged from 31 to 39 feet (9.4 to 11.9 m) wide.

The sign is protected and promoted by The Hollywood Sign Trust, a nonprofit organization, while its site and the surrounding land are part of Griffith Park / The sign is on rough, steep terrain, and there are barriers to prevent unauthorized access. In 2000, the Los Angeles Police Department installed a security system featuring motion detection and closed-circuit cameras