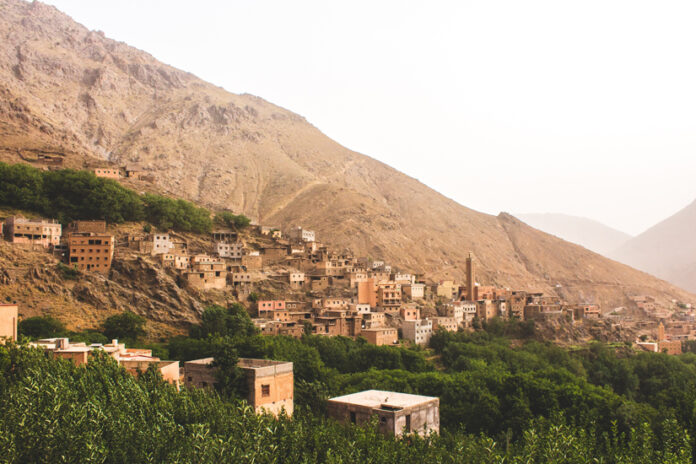 Imlil is a small mountain village in western Morocco, Marrakech-Safi region, Al-Hawz province, Asni district, Asni municipality , in the center of the High Atlas Mountains. Imlil is located in the High Atlas at an altitude of 1,740 m and at the gates of Toubkal National Park, is the starting point for the ascent of Mount Toubkal, whose summit is the highest in Morocco and North Africa.
The film Seven Years in Tibet, released in 1997, was partly shot near the village.
Due to its unique location, Imlil is the center of mountain tourism in Morocco.the village presents itself today with lots of pretty accommodations, colorful souvenir shops and considerable logistics for hikers. The southern end of the village is wedged in the Tubkal National Park, around the eponymous Tubkal peak.
the small town is spoiled for choice between around 40 accommodations in various price and comfort categories.

Access : Coordinates: 31.135793, -7.918889 / Imlil It is located in the High Atlas Mountains. It is 56 km south of Marrakech.An asphalt road, among cacti growing wild at incredible altitudes, connects it to the north with the town of Asni – 14 km  another scenic road (12 km) connects it with the village of Ikkiss in the northeast. A public transport line (including open pick up trucks) travels between these 3 villages several times a week.
/ The place can be easily reached from Marrakech via the R203 and the P2005 (from Asni)

Activities : sightseeing / photo opportunities, , the breathtaking view of the surrounding mountains of the High Atlas is revealed / trekking / Trekking tours from Marrakech.