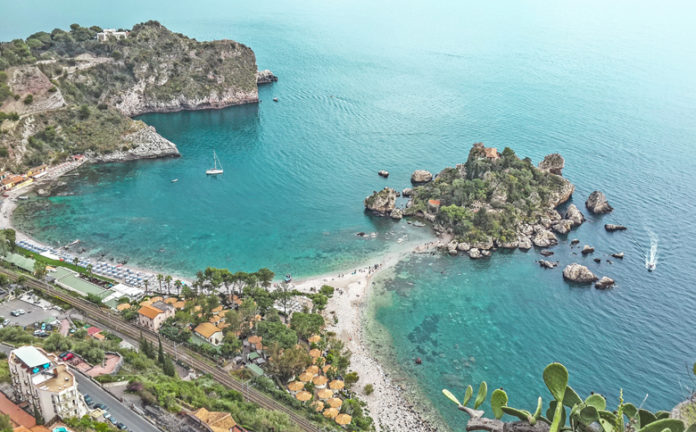 Isola Bella is a small island located in the municipality of Taormina, in the province of Messina.on the east coast of Sicily – Italy .
The name of the island goes back to Wilhelm von Gloeden (  German photographer who worked mainly in Italy  ) , who came to Taormina at the end of the 19th century and made the place known worldwide through his photographs. The small distance from the coast sometimes, due to the tide, is annulled, making it a peninsula. It is also called the “The Pearl of the Ionian Sea”.

Donated in 1806 by Ferdinand I of Bourbon to Pancrazio Ciprioti mayor of Taormina, it was bought in 1890 by Florence Trevelyan.In 1954 it was bought for 38,000  ₤ by the brothers Leone and Emilio Bosurgi, who built a village with 12 autonomous residences and a  swimming pool .

In 1990 the island was finally purchased by the Department of Cultural Heritage of the Sicilian Region , In 1998 a nature reserve was established, managed by the WWF ,
In 2006 Isola Bella together with Taormina were registered in the UNESCO Tentative List to be recognized as a World Heritage Site. the management, use, protection and enhancement of the Isolabella are currently the responsibility of the Archaeological Park of Naxos.

Access : Coordinates: 37.850278, 15.300833 / To get to the island, you take a path in the center of Taormina: descending the hillside of Mount Taurus you reach the state route from which a staircase leads to the island.

Attractions : – The only construction of the island is a villa , center of worldly meetings in the ’50s and ’60s. A small and rather rocky beach  it’s probably best admired.  Entrance fee : 4 euros  / facilities: sunbeds and restaurants.