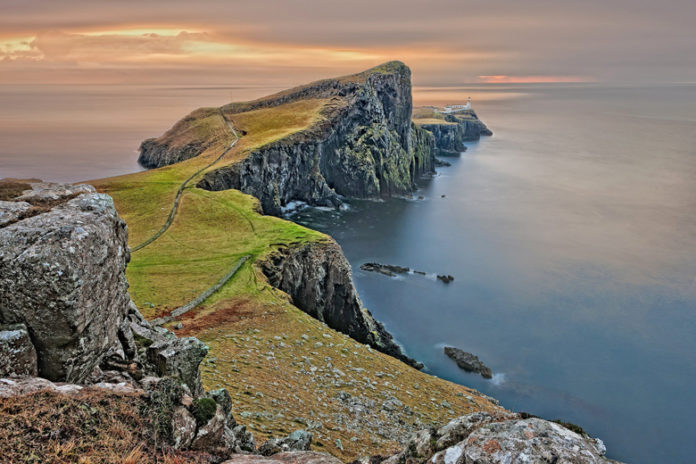 Neist Point is a small peninsula on the Scottish island of Skye and its lighthouse marks the westernmost point of the island. The 19 m high, round lighthouse was built of David Alan Stevenson, cousin of the writer R.L. Stevenson, and a member of a family of engineers who designed much of Scotland’s lighthouses. and put into service in 1909. The system is still in use, however, the lighthouse was automated in 1990.

The lighthouse is still operational, but since 1990, it is controlled remotely from Edinburgh, and the lighthouse keeper’s home is privately owned. Although it is still in operation, the buildings seem abandoned to their fate, so, it is best to continue exploring the area.

Neist Point is one of the most famous lighthouses in Scotland and can be found on the most westerly tip of Skye near the township of Glendale.
In October 1971, the three-storey tower and its buildings were listed and incorporated into the official monument lists of the United Kingdom.
Today the famous lighthouse With the steep cliffs and the summit of the Waterstein Head (296 m), the peninsula together with the lighthouse attracts tourists from all over the world. On one side of the lighthouse, travelers have built hundreds of stone burial mounds, is one of the best places in Scotland to spot whales, dolphins and specimens of basking shark.

Access : Coordinates: 57.423472, -6.788278 / from Dunvegan on the B884, a single lane road towards Milovaig. Shortly before Milovaig branches off a small road that leads over some cattle grid directly to a small parking lot above the cliffs. From there, the peninsula is only accessible on foot  on a marked path . A staircase built into the rock leads down the mountain over the back of the approximately 100 m steep cliff on the other side, down to the lighthouse.

Activities : Nature viewing / sightseeing : photo opportunities- shoot the impressive views of the surrounding cliffs / Guided tours / Scenic Driving- Auto Touring / walking , The trail to the lighthouse , From the parking lot, a 2 hours round trip walk ,there is Excellent concrete path with steps , The difficulty of the path and  care needed is that  , as it passes through the top of the rock , Distance : 3km-1.75 miles