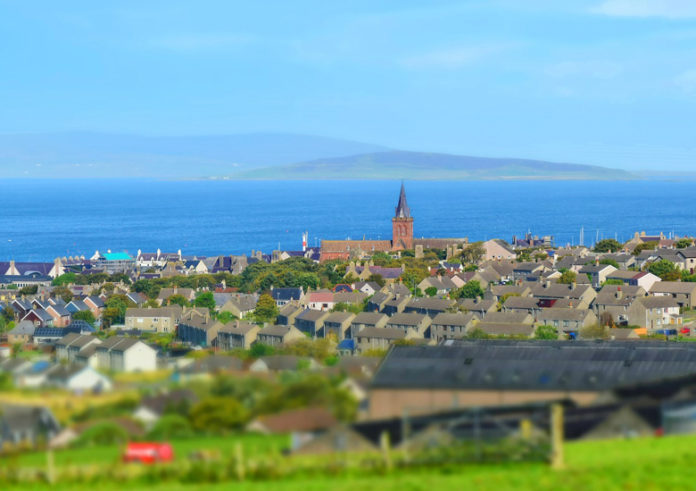 Kirkwall is the largest town and capital of the Orkney Islands, an archipelago some 10 miles off the north coast of Scotland – United Kingdom.

Kirkwall has two faces, depending on where you have just come from. If arriving from a large city such as Edinburgh or Glasgow, it is a small, quiet town, with a gentle pace of life. On the other hand, if you arrive from a more remote area, such as the outer islands of Orkney, Kirkwall seems like a buzzing metropolitan centre with shops, cafes, bars, traffic and areas of housing and industry sprawling south, east and west from its busy harbour.

The development of cruising in Kirkwall can make a substantial difference to the town. Arrival of a 4000 person cruise ship over summer can cause queues to attractions and a jostle for space in the tea-rooms. If you can time your visit to not be on a cruise-day, you’ll find the town much calmer.

By boat :  There are four ferry routes between the Scottish mainland and Orkney. The only one to Kirkwall itself is the Aberdeen to Shetland car ferry, operated by Northlink, which calls here several nights a week. Northbound it leaves Aberdeen at 17:00 (April-Oct Tu Th Sa Su, Nov-March Th Sa Su not Tu), reaching Kirkwall (Hatston Terminal) at 23:00 before sailing on to Lerwick for 07:30 next morning. Southbound the ferry leaves Lerwick at 17:30 (April-Oct M W F, Nov-March W & F not M), similarly reaching Kirkwall at 23:00 before sailing on to Aberdeen for 07:00 next morning.

– ferries to Kirkwall, from both Aberdeen and Lerwick, are evening sailings arriving by 23:00, so you won’t need a cabin, a lounge seat is fine. (But you need to have sorted your Orkney accommodation, as near midnight is a poor time to start looking.) Sailings from Kirkwall to Aberdeen or Lerwick are overnight so you’ll appreciate the cabin, and ability to doze on board till 09:00.

1 Hatston Terminal is two miles north of town on the main road to Stromness: look for the very large wind turbine. Check-in for vehicles is at the start of the pier, check-in for foot passengers is at the end. A late-night connecting bus X10 runs from Kirkwall right to the end of the pier, back to Kirkwall, then on to Stromness – it doesn’t run if the ferry’s not running. Bus X1 Stromness-Kirkwall-St Margaret’s Hope also passes the junction for the terminal, but the last bus is a couple of hours before the ferry. The other three routes, described under Orkney Islands: “Get in”, are: Scrabster to Stromness car ferry 2 or 3 times a day, 90 mins.
Gill’s Bay to St Margaret’s Hope car ferry 3 times a day, taking an hour;
John O’Groats to Burwick ferry for foot passengers and cyclists only, 2 or 3 times a day May-Sept, 40 mins.
Kirkwall is also the starting point for ferries between Mainland and the islands of Shapinsay, Stronsay, Eday, Sanday, Westray, Papa Westray and North Ronaldsay – see those islands for details. These sail from the piers in town centre, not from Hatston Terminal.

Cruise ships often visit the Orkneys. They either berth at Hatston Terminal with a shuttle-bus to town, or anchor out in the bay with tenders bringing passengers ashore. The main tourist attractions get mobbed when they arrive.

By bus :  June to August there’s a daily bus from Inverness, which meets the John O’Groats foot-passenger ferry to Burwick, from where there’s a connecting bus to Kirkwall:  By car :  Kirkwall has numerous car parks located in the town centre and harbour area. Parking around the harbour is free and mainly unlimited time, so it is the best place to park if you are exploring the town for a whole day. However, there can be a lack of parking in the town, even in the pay car parks. Car Parks are charged at: Summer: 1 Hour – 40p 2 Hours – 80p 3 Hours – £1 Winter: 1 Hour – Free 2 Hours – 50p 3 Hours – £1

Activities : Norwegian Constitution Day. 17 May. To celebrate the historical ties Orkney has with Norway, the Norwegian Constitution Day is celebrated every year with a parade and guests from Norway.
St Magnus International Festival, e-mail: info@stmagnusfestival.com. 22-27 June 2018. Orkney’s midsummer celebration of the arts. Founded in 1977 by a group including the late Sir Peter Maxwell Davies, the Festival has grown from small beginnings into one of Britain’s most highly regarded and adventurous arts events

Go next : Kirkwall is within easy reach of the rest of Orkney. The top sights on Mainland are Stenness with its neolithic remains, Stromness the old fishing port, and the road across the “Churchill Barrier” past the Italian Chapel. Beyond Mainland, visit one of the other islands for a tranquil contrast: Shapinsay is the closest. And then either continue north to Shetland, or return south to the Scottish mainland – which you’ll have to do to reach the Hebrides and other Scottish islands