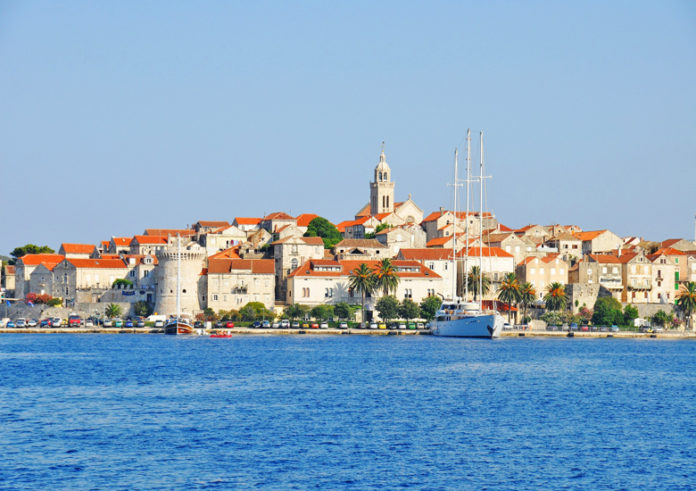 The southern-Dalmatian island of Korcula  ( Croatia  ) ,stretches parallel with the nearby mainland in the west-east direction. It is 46.8 km long, its average width is 5.3 to 7.8 km, it covers an area of 270 km , and is the sixth largest Adriatic island. The Peljesac Channel, which separates it from Peljesac peninsula, is 1,270 m wide at its narrowest point.

Korcula is one of the largest Croatian islands and has almost 200 coves and beaches including a couple of sandy ones. The island is a favourite with UK visitors. According to locals, Korcula is the birthplace of explorer Marco Polo and maritime discoveries are part of the culture here. The island has vineyards and olive groves, superb wines and the colourful Moreska dance.

The first tourists arrived on Korcula in the 1920s but it wasn’t until the 1970s when a marina was added that tourism took off. Even so, the island is still remarkably unspoilt with old stone villages and sleepy bays. There’s a 200 metre stretch of sandy beach at Lumbarda, specifically at Prizna Bay about 7 kms from Korcula Town and served by local bus, and some traditional stone masons still have studios there.

Like most of the Croatian islands, the Greeks, who gave it the name Korkyra Melaina or ‘Black Corfu’ for its dark and densely wooded appearance, first settled Korcula, in the 6th century before Christ, at first next to today’s Vela Luka. Sometime later, at the other end of the island, the territory of today Lumbarda, the Greeks arrived from the island of Vis (Issa), establishing a significant settlement. In the first century AD the island of Korcula as well as the whole of Dalmatia were conquered by the Romans who named it Illyricum. In the 7th century Croats came to the Adriatic and soon founded their own state, which was first a principality, and after 925 years of the first coronation of King Tomislav becomes a kingdom and the island of Korcula was part of the kingdom of Croatia. In 1000 Venetian Doge Peter II. Orseolo conquered the Dalmatian towns and islands, and Korcula then fell under the government of Venice. When Napoleon overthrew the Venetian Republic, Dalmatia was for a short time ruled by Austria, but soon the French, then the English, to finally Dalmatia came under Austrian administration under which it remained until the end of the First World War (1918). After the democratic elections in 1990 in a referendum Croatian population opted to exit from Yugoslavia and declared the independent state of the Republic of Croatia. The stormy history of Korcula remained written in stone and can be seen on every piece of this unique island.

Explore Korcula  : St Antony’s steps (all 101 of them) and about ten minutes out of Korcula Town are well worth the climb between towering cypress trees for the view from the top at the site of a hermit priest’s home. Korcula Town is a glorious place enclosed by stone walls the colour of pale honey. The narrow streets radiating from the central square are in a herringbone pattern, ensuring cooling breezes during hot summer months. Bars, restaurants, cafes and shops are located by the marina and in the centre of the old town.

It’s also worth considering a water-taxi trip to Badija, the largest of the Skoji islands. Boats usually moor alongside an impressive Franciscan monastery. From here, tracks lead to the beaches and you may well find that you have a cove to yourself.

Access : Coordinates : 42.95, 17.116667 / There are many links with the mainland: in the first place the car ferry that sails to the nearby Peljesac peninsula ( Orebic ) several times a day. Passenger only motor boats also go to following places on Peljesac, to Orebic, Kuciste, and Viganj. Several fast catamarans a day ply between the town of Korcula and Split, Hvar, Mljet and Dubrovnik, and there is a daily car ferry from Vela Luka to Split and Lastovo and back. There are several buses a day to all the island villages, one bus a day to Dubrovnik, and several a week to Zagreb

The town of Vela Luka on the western tip of the island of Korcula is connected with catamaran and car ferry with Split, the largest passenger port in Croatia. From Split, it is easy to reach all other central-Dalmatian islands, and the east coast of Italy (Ancona and Pescara). The town of Korcula is conencted to the port of Dubrovnik, and from Dubrovnik there are regular ferries to Bari in Italy. Unfortunately, currently there are no direct ferries from Italy to the island of Korcula.

Activities :  Beaches & nature
If you are the relaxed traveller looking for a quiet getaway, it’s possible to soak up the sun on some of Croatia’s most beautiful beaches. Some of the beaches on the island are quite liberal, with fully nude sunbathers.

Most of Croatia’s beaches are quite rocky, so it is imperative to wear the correct footwear. If you plan to swim, wear shoes or swim fins in the water—there are many sea urchins!

The beaches on Korcula offer gorgeous views of the karstic coastal ranges. One can also see the nearby coastal village of Orebic.

There are two sandy beaches on Korcula, just to the east of the village of Lumbarda, one on the north coast and one on the south coast at the narrowest point on the island.

Rent a kayak (there’s a booth at the beach on the west side of old town)
Rent or buy a snorkel, mask, and swim fins and go snorkeling around the island. Or, rent the kayak and snorkel set and go paddle to some of the islands around Korcula and snorkel there! Recommended is the southeast coast of Badija island—there is a nice small beach for your kayak and some lovely snorkeling.
Local shops offer bike rentals (€9-12/day) if you choose to ride around the island.
1 Kocje Rock Formations (Follow signs to Zrnovo. Continue straight through Brdo; the road turns to gravel.). High up, in the interior of the island, is this nature preserve of massive limestone rock formations and chasms. It’s a bit tricky and a lot of fun to climb on them. No equipment needed except good shoes. Legend tells of fairies living here. Free.
Culture :

Korkyra Baroque Festival, In various buildings in Korcula town.. An annual series of concerts showcasing a selection of Europe’s leading ensembles and soloists specialized in Baroque music. Ten or so evening concerts are held over a period of two weeks in early September (3–17 September 2016) along with a series of supporting events. Along with the festival’s high artistic credentials the event also promotes the richness of Korcula’s cultural monuments and the whole town as a unique architectural treasure.