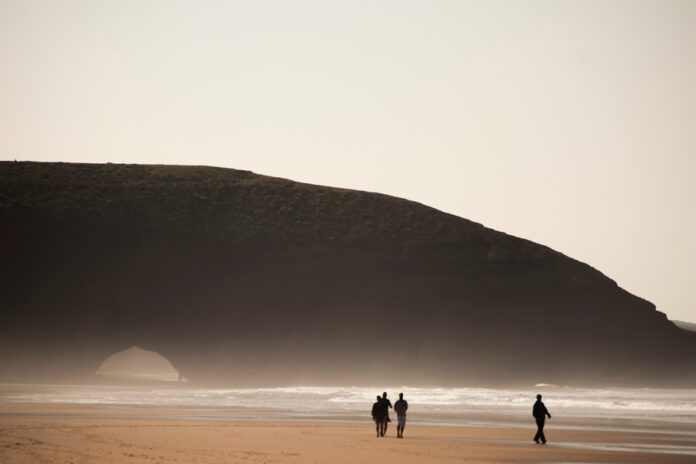 The secluded Legzira beach is located on the Atlantic coast in the province of Sidi Ifni, ten kilometres from the city of Sidi Ifni in the southern region of Morocco.

Legzira Beach It is famous for its orange-red rocks – arches created by nature.
The settlement and its beach gained fame in the late 2000s, remaining to this day a place that attracts a large number of tourists and surfers. In March 2014, the Moroccan magazine La Nouvelle Tribune listed Legzira Beach as one of the twelve most beautiful beaches in the country.
One of the most famous beaches in Morocco, Legzira Beach is a very touristic place, people can ride a camel or a quad bike. Most people come here to take spectacular photos, as well as admire the sunset,Sometimes excursion groups from Agadir are brought in during the day. In the morning and in the evening it is deserted, there are only fishermen, surfers and independent travelers.

Go next : The town of Tioughza / Sidi Ifni – a city in southwestern Morocco, on the Atlantic Ocean in the Tiznit province.