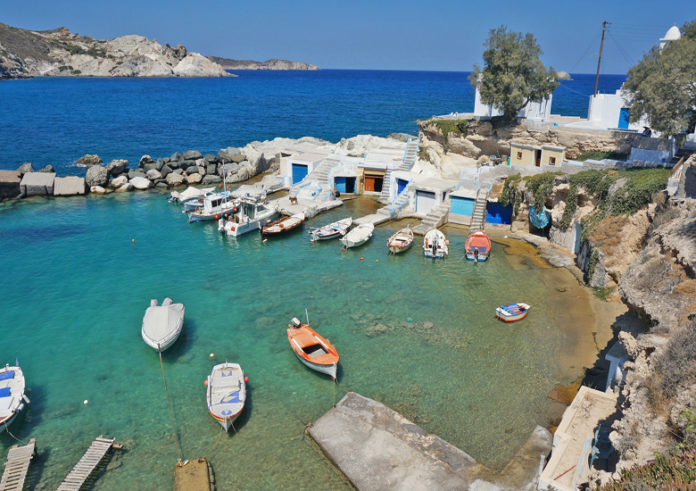 Mandrakia A Picturesque Fishing Village at the north of the island of Milos , a small, pretty fishing village with a church, a restaurant and a lot of traditional ”syrmata” (boathouses) grouped around a small circular harbor bay. / on Milos Island. Milos is a volcanic Greek island in the Aegean Sea , an island well known and admired for its natural beauty.

The island is famous also for the Venus de Milo, a statue of Aphrodite, now in the Louvre. The island of Milos is located on the Southwest side of the Cyclades complex, 86 nautical miles from Piraeus and 105 nautical miles. from Crete.
Built around the temple of Zoodohos Pigi, the village of Mandrakia stands out for the famous -” syrmata”- the traditional fishermen’s boathouses –  the positions of small boats dug into volcanic rocks, mainly in coastal settlements and fishing villages. Today they offer their “services” as holiday homes or warehouses, and some of them  have been converted into traditional hostels., the cave-like storage spaces for the boats with the rock-stepped stairs and the colored doors.

Access : Coordinates: 36.750928, 24.446017 / Rental vehicle-Scooter , car ,ATV: In Adamas and Plaka rental of small and two-wheeled vehicles, due to the short distances a scooter for exploring the island is usually sufficient.Mandrakia is reached by a road that starts in the northern part of Pera Triovasalos.

Activities : sightseeing / photo opportunities / Hiking / Swimming & bathing : at the beautiful beaches especially on the north coast, as well as in the southeast of the island

Go next : The nearby sandy beach Tourkothalassa / The picturesque village Plaka, also known as Chora / Venetian castle / Catacombs at Tripiti / villages that still have syrmata : Schinopi, Areti, and Fourkovouni,