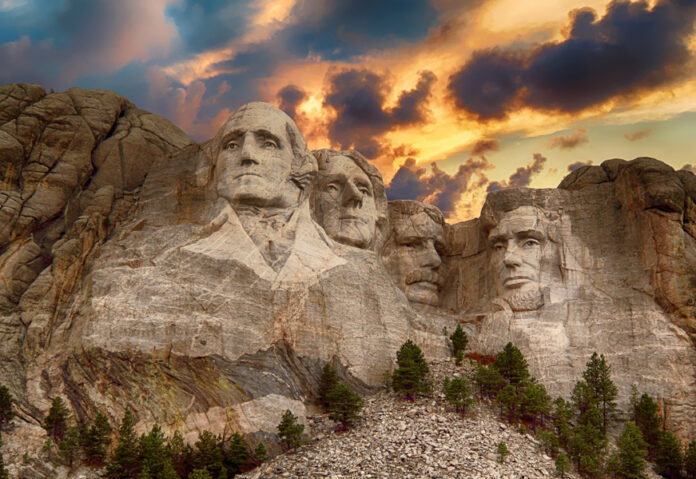 Rushmore is a mountain in the Black Hills, southwest of Keyston in South Dakota, USA.
It is known for the fact that in its granite rock there is a bas-relief 18.6 meters high, containing sculptural portraits of four US presidents: They are, left to right, George Washington (1732-1799), Thomas Jefferson (1743-1826), Theodore Roosevelt (1858-1919) and Abraham Lincoln (1809-1865).
The monument is the work of sculptor John Gutzon Borglum and his son, known for his anti-Indian views.  Borglum, who started the construction of sculptures by carving hard granites with his son in 1936, completed his work in 14 years.
For the most part, Mount Rushmore consists of granite. Nearly 90% of the monument was sculpted with the help of dynamite explosions. The details on the faces of the presidents are shaped with a pneumatic hammer. Despite the extremely dangerous working conditions of the workers who were descending the rocks tied with steel ropes, there have been no deaths in the 14 years of construction and sculpture.

The sculptor’s overall plan has not been fulfilled. The presidents were supposed to carve from head to toe in the rocks, but the work was suspended due to Borglam’s sudden death. His son later tried to complete his father’s case, but funding for the project was stopped because the money was diverted to World War II resources.
Today ,tourism is South Dakota’s second largest industry, and Mount Rushmore is the state’s largest tourist attraction. Every year, the attraction is visited by about 3 million travelers from different countries .  The area also hosts the last concerts during Rushmore Music Camp, and also draws many visitors a week during the Sturgis Motorcycle Rally.

There is no fee for visiting the sight itself, but you have to pay for parking a car or motorcycle, its full cost is $ 10, for pensioners – $ 5. The paid document is valid for a year.

Activities : sightseeing / photo opportunities, The bas-reliefs also look spectacular at certain evening hours, when the backlight is turned on. / trail : The route to the landmark begins at the Column Alley with state flags.

Go next : Crazy Horse Memorial / Keystone ,a town in the Black Hills region of Pennington County, South Dakota / Sturgis , a city in South Dakota that is most famous for the Sturgis Motorcycle Rally.